Daniel Cady (1773-1859) was a prominent lawyer, politician and judge in Upstate New York. His seventh child, Elizabeth Cady Stanton, was born in 1815, the same year her father became a Congressman. She recalled her father as being “sensitive and modest to a painful degree. There were but two places in which he felt at ease – in the courthouse and at his own fireside.” Stanton would go on to write: “Perhaps the excitement of a political campaign, in which my mother took the deepest interest, may have had an influence on my prenatal life and given me the strong desire that I have always felt to participate in the rights and duties of government” (Eighty Years and More, Elizabeth Cady Stanton, 1898).

During her childhood, Stanton would often spend a lot of time at her father’s office in Johnstown and his home office (Map of Fulton County, J. Chace, 1856). Here she would “hear his female clients bitterly complain about their lack of rights, something that resonated within her even at a very young age” (Hudson-Catskill Newspapers, 31 Aug 2011). In an interview conducted by The Daily Republican, in December of 1895, Stanton explained how her activism began “It happened this way: My father was a lawyer, Judge Cady…I took the keenest interest in what I heard. It gradually dawned upon me that of all the clients who came there the women alone got no comfort.” She would go on to dedicate her whole life to fighting for equal rights for women.

In 1854, Stanton was preparing her first speech for the New York legislature. Her father asked her to stop in Johnstown at his office where she read the speech to him. In her autobiography she wrote, “I cannot express the exultation I felt, thinking that now he would see, with my eyes, the injustice women suffered under the laws he understood so well” (Eighty Years and More). After she finished reading, he asked her where she learned such as lesson. She replied that she learned it in his office as a child “listening to the complaints women made to you.” Stanton recalled in Eighty Years and More of her father after reading her speech “How he felt on the question after that I do not know, as he never said anything in favor of or against it” but he always offered to help her look up laws that would support her argument regardless of his opinion and political views.

Stanton died in 1902, sadly another 18 years before women achieved the right to vote. However thanks in part to her father’s influence, she was successful at winning other battles for the cause and continues to serve as a courageous role model into the present day. 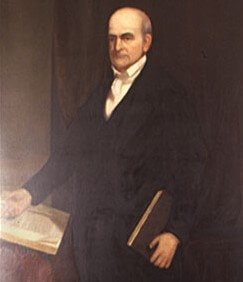