In the early 1820s, a school building was constructed for local children residing in Mexico, New York. In 1826, a new legislative act was passed and the school became incorporated under the name, Rensselaer Oswego Academy (Laws of the State of New York, 1826). The board of trustees named the academy after Stephen Van Rensselaer, a wealthy education supporter, with the hope he would financially back the new school (Mexico, Mother of Towns, Elizabeth Simpson, 1949).

In January 1833, the Academy was “admitted to the state system by the Education of Regents” (Mexico, Mother of Towns). An increase in attendance led to the need for an additional building and, in 1836, a second wooden building was constructed in front of the existing school (Mexico Academy and Central School National Register of Historic Places Form, 1991). It was “crowned by a belfry and bell” (Mexico, Mother of Towns). Following this, another legislative act was passed in May of 1845 that legally changed the name of the school to the Mexico Academy (Laws of the State of New York, 1845).

In 1854, it was decided that the building once again needed to be replaced. The community raised money for the new school and in December 1855 a new red brick school was dedicated debt free (Images of America, Bonnie Shumway, 2009). The old building was sold, and the bell removed and placed in the new school.

A few decades later the local schools of Mexico merged with the Academy to create the new Academic Union School (“Grip’s” Historical Souvenir, Edgar Luderene Welch, 1904). In 1895 the Board of Regents changed the Academy’s name to Mexico High School to give the merged schools a new identity. Despite this, only four years later in 1898 the school was renamed once again, this time as Mexico Academy and High School (Celebration of the Centennial Anniversary Pamphlet, Alumni Association of Mexico Academy, 1926).

In August of 1926, the school held a Centennial Celebration. The entire community partook in the four day celebration (Mexico Independent, 20 Aug 1926).  That same year, the state department of education, “declared the academy inadequate and demanded a new school be built” (Images of America). Two years later, the fourth academy building was dedicated and opened. Sadly in 1936, the school was destroyed in a fire, with faulty wiring cited as the cause (Plattsburgh Daily Press, 17 Feb 1936).

As decades passed, the building underwent a few minor renovations. As of 2019, this structure continued to serve local children as Mexico High School, part of the Mexico Academy and Central School District. The bell from 1836 was still intact too and “rings with the start of school each September” (Images of America). 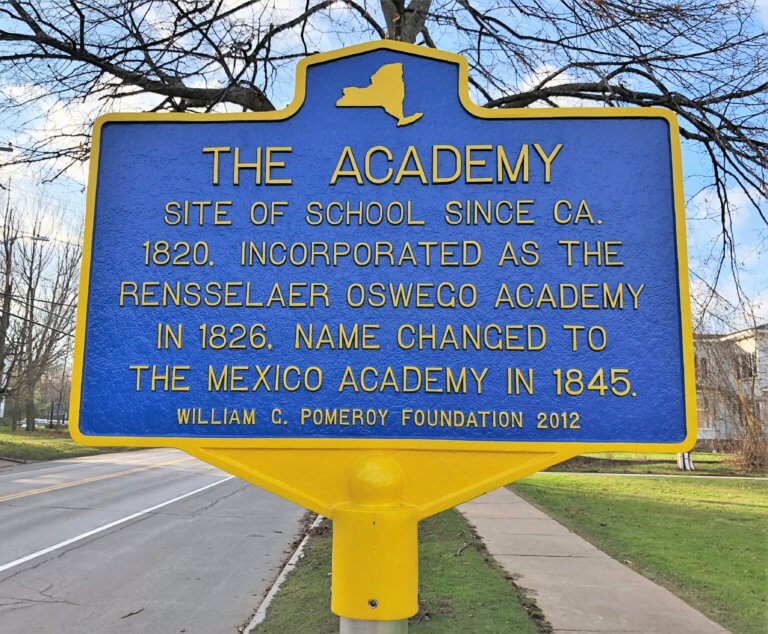 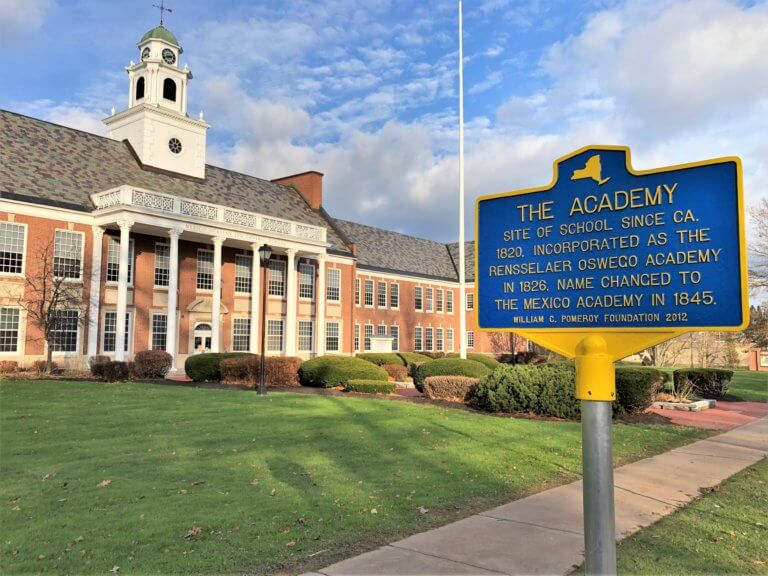