The Boyington Oak is the name of a historic, living oak tree located in Mobile, Alabama. The story behind this legendary tree begins with the arrival of 19 year-old Connecticut native and printer by trade, Charles R. S. Boyington, to Mobile in 1833. Boyington leased a room at a local boarding house and roomed with another man, Nathaniel Frost. Only months later, Frost was discovered stabbed to death in the nearby Church Street Graveyard with Boyington identified as the last person to see him alive. Once it was discovered that Frost owed Boyington money, a motive was established for murder.

Boyington was arrested and put on trial for Frost’s murder. From the very beginning Boyington staunchly maintained his innocence. Despite this, he was convicted and sentenced to death by hanging. It is believed that only circumstantial evidence was offered and that it was presented to an unqualified jury. Prior to his death, Boyington proclaimed that his innocence would be proven by a oak tree which would grow out of his heart and on top of his grave. He was executed on February 20, 1835. His remains were buried in the same cemetery his roommate’s body was discovered in – Church Street Graveyard. Eventually an oak tree did in fact grow in the location where he was buried. Later on, and unfortunately much too late for Boyington, two people confessed to the crime on their deathbeds.

As of 2020, the Boyington Oak still stands. It measures approximately 60 feet tall with branches as long as 110 feet. Some folks claim to hear crying and whispering noises originating from the tree’s vicinity, fueling beliefs that Boyington’s ghost remains nearby, continuing to seek his vindication. 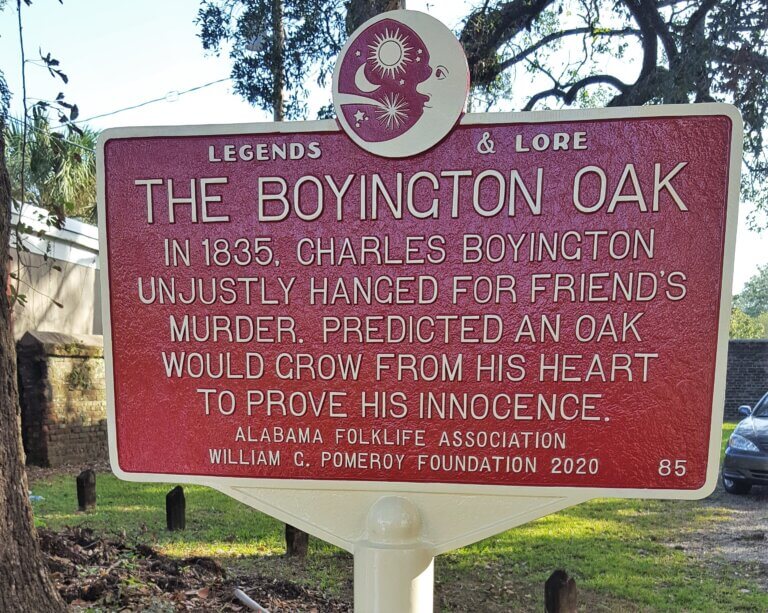