On July 27, 1907 tragedy struck when fire broke out on a passenger steamer boat named the Frontenac as it crossed Cayuga Lake. Despite rescue efforts by the crew and people on shore, there were multiple fatalities.

The Frontenac was believed to be one of the largest steamboats to operate on Cayuga Lake. According to a July 28, 1907 article in the Democrat and Chronicle, the Frontenac was “an old side-wheel, double deck craft, which had plied between Ithaca and Cayuga on Lake Cayuga for the past twenty-five years.”  At 135 feet long, it was said to could accommodate a large number of passengers at a time – up to 350. The captain of the steamer at this time was Melvin P. Brown, a Syracuse native who had been in the ferrying business since 1873. He was the, “general manager and president of the Cayuga Lake Transportation Company,” who owned the Frontenac (Democrat and Chronicle, 30 Jul 1907).

The July 29, 1907 Utica Herald Dispatch reports that on July 27, 1907, the Frontenac, “was on her afternoon northbound trip and was directly in the middle of the lake and about three-quarters of a mile north of Lavenna and three miles south of Union Springs when the fire was discovered.” On this day the steamer was carrying fifty passengers and twelve crew members (Democrat and Chronicle, 28 Jul 1907). The Utica Herald Dispatch article states that “the fire was discovered in the crank pit and between the first and second deck.” As smoke appeared, ten year old passenger Willis Bruce first noticed the flames and reported it to Captain Brown. Fanned by a strong northwest wind, Brown and crew were unsuccessful in their attempts to extinguish the flames and ordered the boat to be steered towards shore where it was grounded in five foot deep water. The crew assisted passengers with life jackets and helped them jump overboard to swim the 200 feet to shore. They even had to throw some terror stricken passengers off the boat. The strong waves made it difficult for many passengers to swim, especially for women dressed in the long, dense skirts common in this period. Fortunately, given their proximity to shore, men from the summer camps lining the shore “did valiant work in rescuing the passengers and in caring for the injured” (Democrat and Chronicle, 28 Jul 1907).

According to the Amsterdam Evening Recorder dated July 27, 1907, a relief train was “dispatched with medical supplies and to bring to Auburn those victims who are in a condition to be moved.” Unfortunately, the Utica Herald Dispatch reported that eight passengers died: six women and two children, along with six who were critically injured. The cause of the fire remained a mystery and was never ultimately determined (Democrat and Chronicle, 30 Jul 1907).

The Utica Herald Dispatch conveys Captain Brown’s remark that there was, “but one redeeming feature of the disaster.” Due to the strong winds and heavy sea condition, he intentionally did not make his scheduled stop in Aurora. As a result, he saved an additional forty passengers from also being involved in the Frontenac fire.

According to an April 3, 2016 Finger Lakes Times article recounting the tragic events of July 27, 1907, the Frontenac wreckage remained in the lake until World War II, when demand for scrap metal was high. The wreckage was removed and recycled. 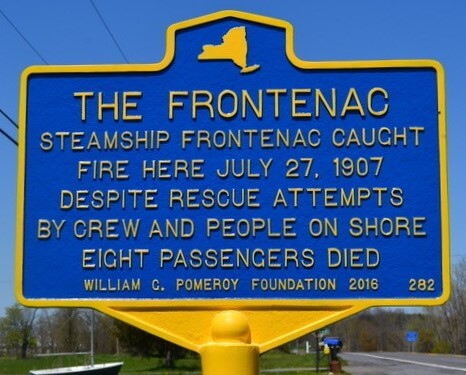 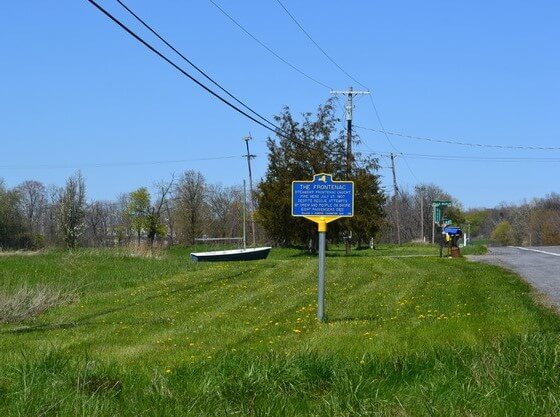 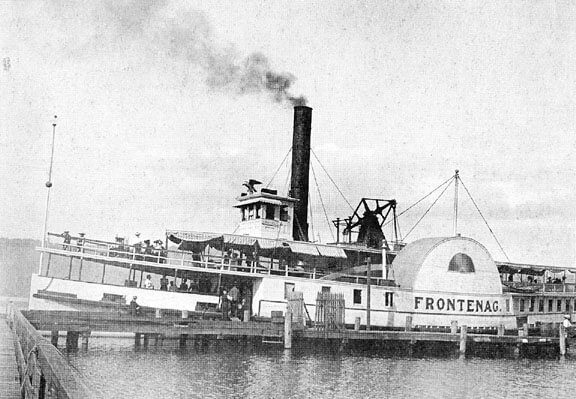