The Hill Church was built in 1835. Local residents financed its construction and voted on the denomination of the church. In 1838, the congregation chose to become a Reformed Dutch Church.

According to Edward Manning’s The History of Orange County, NY, 1825-1907 (1881) the church, located on an “eminence, designated from others in the village as ‘the church on the hill,’” is described as sustainably built, with proportions of 70 x 50 feet. It cost $12,000 to build, and could comfortably accommodate 500 persons. Organized with a founding-membership of twenty, the choice of a Reformed Dutch Church was decided by a majority of votes, under the care of the “Classis of Orange.” The first consistory, or ruling body of a Reformed church, comprised Jesse Scofield and Barent Van Buren, elders; and Alexander Kidd and Peter Clearwater, deacons.

Manning also notes that the foundation was laid in the summer of 1835, the building enclosed by fall 1836 with the basement sufficiently finished to be used for religious service. In the year 1838 the building was completed and consecrated with a sermon delivered by Rev. Thomas Dewitt, D.D., of New York City. Steps were next taken for the construction of a parsonage on the northern grounds abutting the church. Its cost was $3000. In the year 1871 an addition was made to the parsonage, making it a “double house” at an additional cost of $2000.

There were a number of pastors who served short terms in the beginning of the Church’s history. Rev. Charles Whitehead answered the call in April 1842, remaining for seven years. Under Whitehead’s ministry the church grew and multiplied. In August 1849, after careful consideration Rev. M.V. Schoonmaker was “duly installed as pastor,” a post he still served 31 years later, at the time of Manning’s publication. In the 1880s, the congregation numbered 100 families and 200 communicants, with a Sabbath-school of 150 scholars. Members of the then-present acting consistency included: E.W. Knapp, J.V. Tears, H. Suydan, A. Bateman, elders; Robert Moore, J. Lefevre, P. Millspaugh, J. Millspaugh, deacons. 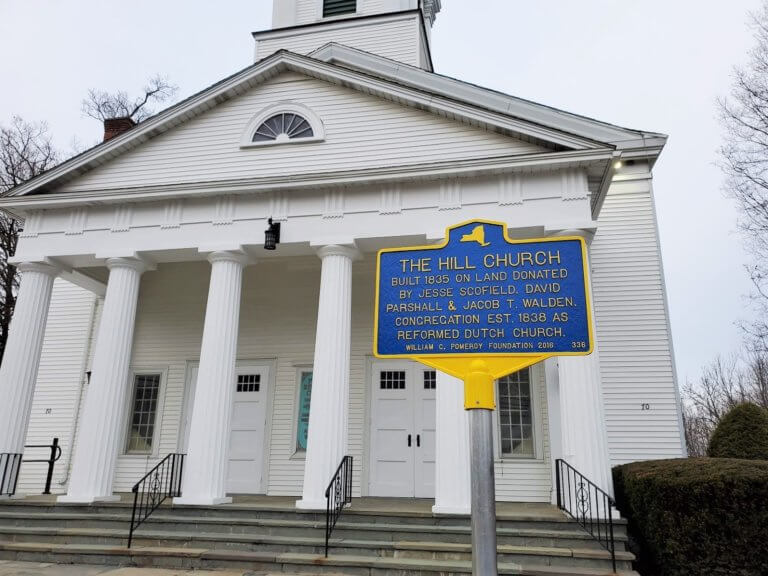