This former steamboat wharf was instrumental in the growth of this Long Island village. Originally called “Musketa Cove,” the name Glen Cove was chosen for its more appealing sound. The New York Yacht Club located here as the cove allowed anchorage for the mega-yachts of many of America’s early 20th century captains of industry.

History of Queens County, NY (1882) confirms the name of the place was changed to the “new and more attractive appellation Glen Cove.” The old name, “Mosquito Cove,” the county history explained, “[had] a certain suspicious sound to would-be visitors, who feared lest the name and nature of the locality might be one.”

The same source also provides a biographical sketch of one of the community’s early entrepreneurs and principal landowners: William M. Weeks (1803-1883). We learn that Weeks began his career by leasing a small store and commencing trade at the landing. Gradually increasing his business, and taking a lively interest in local enterprise, “he built shops and otherwise aided mechanics, such as carriage makers, blacksmiths, tailors, and shoemakers, in starting their respective businesses.” Weeks is also mentioned in connection to the steamboat wharf: “soon after his coming to the village and commencing business the movement for starting a steamboat line between that place and New York City was organized, and Mr. Weeks caused the wharf to be built at Cape Breton.” It was also noted that a small hotel was built here to “meet the wants of the visitors who now began to come from the city in quest of summer board,” further documenting the rise in trade and commerce that the wharf generated. At the time of the 1860 census, Weeks was 56 years old, his occupation listed as that of a “gentleman” with 5 dwelling houses, total real estate valuing $4,000, which was well above other heads of household.

A series of Higginson’s topographical Maps of Kings and Queens Counties provided by the City of Glen Cove document the economic development of the landing. In 1859, Week’s name appears prominently in connection to a property at the end of a road overlooking Hempstead Harbor. A 1860 map now shows a steam boat landing on either side of the Harbor. By 1880, W. Weeks appears to own Harbor-front property at the end of Red Spring Road, and what was referred to simply as “steamboat landing” on the earlier map now reads “Glen Cove Landing.” The 1883 Final Will and Testament of William M. Weeks also helps corroborate the development: this documents bequeaths three different properties to his heirs, the house where he resided at the time of his passing, “Glen Cove”; another house at “the Landing”; and “the Steam Boat Dock and its appendices”.

An August 15, 1931 Brooklyn Daily Eagle article announces a commercial dock plan following a significant gift of the Pratt estate to the City of Glen Cove, “a large strip of land along the south side of the Glen Cove Creek to aid in making a modern waterway of the inlet.” The dock was to be constructed after the waterway was dredged to navigable depth, the industrial and commercial shipping discharged at the creek end of the Hempstead Harbor. There is also a reference to The New York Yacht Club’s use of a new pier to extend into the harbor between the creek dock and the Morgan Park beaches, where “nothing but pleasure yachts will dock at the west end.” 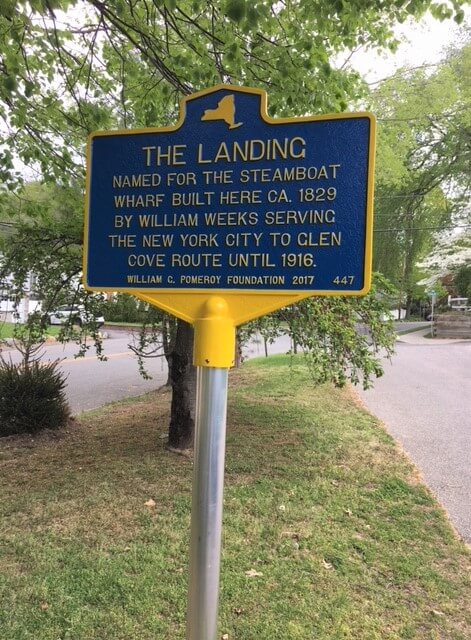