The Pavilion was the site of the Blue Sulphur Springs Resort, 1835-1858. Water from the spring was said to have healing powers. It was also known as early settler campground and buffalo lick.

According to Greenbrier Historical Society, the Pavilion is a monumental Greek Revival structure located in Blue Sulphur Springs, Greenbriar County, West Virginia. The only surviving remnant of the Blue Sulphur Springs Resort, a 19th century mineral spa, the Pavilion, or springhouse, was built to shelter the sulphur spring at the resort. Much photographed over the years, most notably by Stan Cohen’s Springs of the Virginias-A Pictorial History (1981), of the many resort pavilions throughout the State, no other exhibits this particular architectural style.

The University of Virginia’s Claude Moore Health Sciences Library included the Blue Sulphur Springs in an online exhibit called Taking the Waters: 19th Century Medicinal Springs of Virginia (2007). Inspired by William Burke’s Mineral Springs of Western Virginia (1846), the exhibit noted that the Blue Sulphur Springs’ setting in a valley with numerous improvements including a brick hotel with two additional buildings attached to make a continuous range of two and three story structures for 420 feet. By additional brick cottages and frame cabins, Burke estimated that 300 people could be comfortably accommodated. In fact, Burke described the location of Blue Sulphur as a “picturesque” and “agreeable place”, with “the table to be among the best on the west side of the Blue Ridge”. While he described the Pavilion, or “Temple”, as “well-designed but badly executed”, he celebrated the fountain inside as “one of the most beautiful objects imaginable. The sides are covered with a brilliant pink deposit, and the clear, cool, crystalline water seems to say ‘Come and drink me.’”

An entirely open one-story structure with commanding view of the surrounding valley, the Pavilion has a square floor plan, each side measuring 32 feet and 10 inches. Dating from 1834, when it was built with the resort, it was added to the National Register of Historic Places on October 29, 1992.

Aside from the Pavilion’s architectural significance, the nomination author continues, the Blue Sulphur Springs Resort also has historical importance as a source of health and leisure. Throughout the early 19th century it served as a watering place for travelers from near and far to relax and escape the pressures of daily life. “Taking the waters”, as it was commonly described, was part of the treatment to promote health and the sulphur water was generally viewed as an elixir which could cure various ills. These activities benefited the welfare of society, attracting many people including some of the great historical figures of the era such as Robert E. Lee, Henry Clay, and Presidents Andrew Jackson and Martin Van Buren. During the war, Greenbriar County saw bitter engagements between Union and Confederate forces. Already in decline by the 1850s from other health spa competitors and a stagnant antebellum economy, the resort was used alternately by both armies as a bivouac and hospital. In 1864, Union troops burned all of the buildings at the resort to prevent the Confederates from using them as an outpost. Only the Pavilion was spared; the heart of the resort, since 1864 it has stood starkly on its own against rural pasture land.

The Society website reports the structure, now more than 170 years old, in a state of “severe disrepair” that may collapse without intervention. A stopped-up drainage system has resulted in standing water that is undermining the foundation. One of the 12 Doric columns has slipped off center. In April of 2013, the Pavilion and surrounding 2 acres were donated to the Society by Ms. Rebecca Fleshman Lineberry. At this time, a nonprofit group called “Friends of the Blue” formed to save the Pavilion through promotion and fundraising. In 2013, the Historic Preservation Alliance also identified the Blue Sulphur Springs as one of the most endangered historic resources in the state. 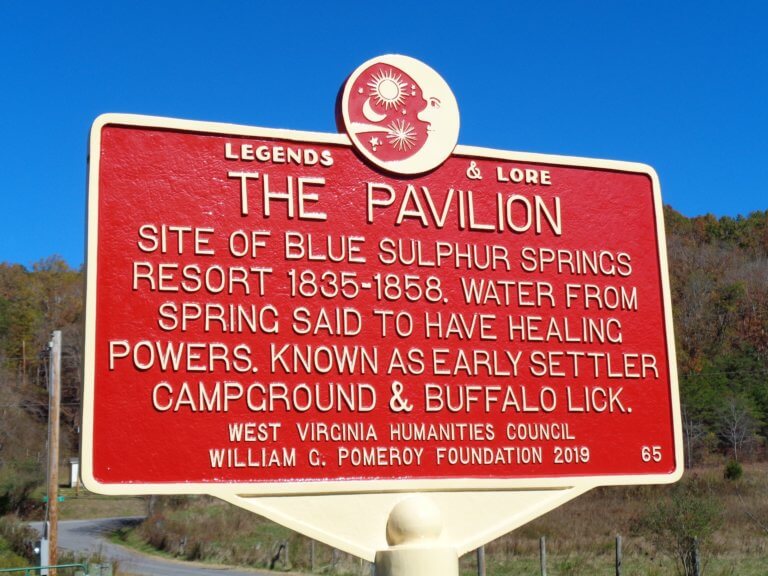 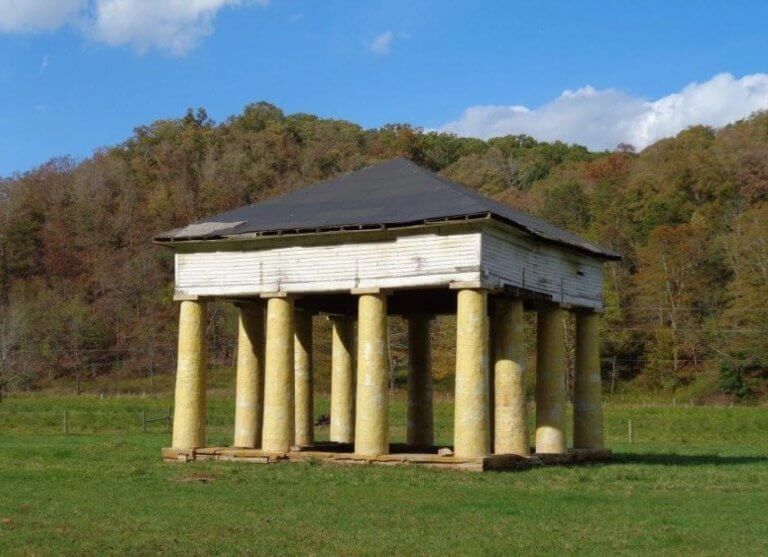