This legend describes a young bride dressed in white who died during an accident on her wedding night. Local lore says that a ghostly apparition – the woman in white – can be seen searching for her groom along Cedarvale Road, Marcellus, NY, a winding and hazardous road also known as the “13 Curves.”

Variations of the legend exist, including more modern iterations with the couple riding a motorcycle. The common thread in this legend is that a young bride haunts the place of her and her new husband’s death after their wedding. One version has it that the couple supposedly crashed in 1954 while driving along the dangerous section of road. Ever since, according to the tale, a woman in white can be seen lingering along the road and intercepting unlucky drivers at night. (Newshouse, 2014) One reporter, Ben Walker, related rumors that the alleged accident happened in 1928, though he admitted he had no proof of the veracity of these claims. (Macmillan, 2015)

The story exhibits similarities with the folklore theme of the vanishing hitchhiker or traveler, as well as containing elements of lady in white and La Llorona stories from the American Southwest. Dick Chase, a writer for the Onondaga Historical Association, stated that a local woman invented the story to scare a group of “smart aleck” teenagers. She and her daughter apparently orchestrated a hoax, with the daughter playing the part of the woman in white while her mother drove the teens down the dark and winding road. (Macmillan, 2015)

While the white woman may simply be a hoax or tall-tale, Cedarvale road has witnessed a number of real injuries and deaths as all similarly hazardous roads do. On July 4, 1941, a woman died in a collision, though she was not a bride. On November 30, 1959, two girls died after their toboggan slid onto the icy road and collided with an oncoming station wagon. Reportedly the road was so icy at the time that the responding police officer was barely able to stand on it. While there have been a number of other cases of tragedy on the road, no evidence of a newlywed bride dying in an accident exists. Given the notability of such an accident, especially in the early years of the automobile, it is unlikely such a case would not have been featured in local or even state or national newspapers. Also such accidents usually produce other legal documents which, in this case, are conspicuous by their absence. Nonetheless, the eerie feelings of travelling on dark and remote roads at night will continue to fuel tales of hauntings like the legend of the Thirteen Curves. (Macmillan, 2015)

The story inspired three local filmmakers to make a short silent film called “13 Curves: A Story of Love and Death”, loosely based on the legend. (Newshouse, 2014) 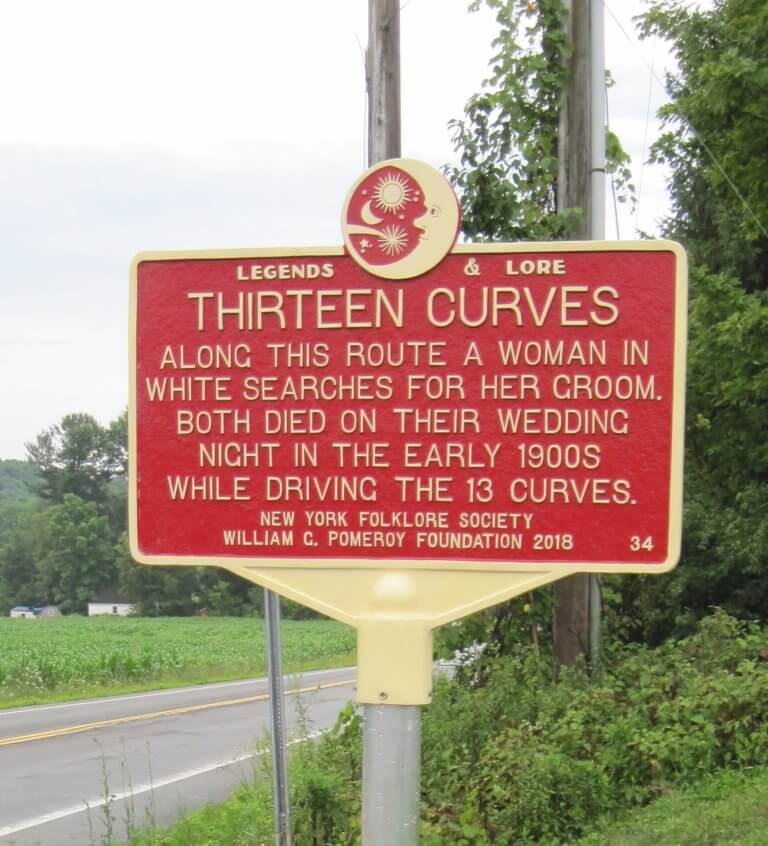