An article in the August 12, 1932 Altamont Enterprise describes Miss Mary D. Gregg’s Altamont High School graduation essay, “The Old Schoharie and Albany Plank Road.”  Her essay deals in detail with the history of the Albany-Schoharie Plank Road from its incorporation in 1849 by the Plank Road Association to its abandonment in 1866. According to Miss Gregg, the structure of a plank road was not complex.  As a base, six parallel stringers, 3- by 4-inch timbers, usually of hemlock or birch, were laid in the ground end to end.  Then 9- or 10-foot long planks were laid crosswise as close as possible, but never nailed. As a result, she wrote, “All day long, a rumble as of distant thunder resounded across the countryside, as the wagons, coaches, and herds of stock traveled up and down.”

The plank road traveled from the Great Western Turnpike (Route 20) in Guilderland, through Altamont, the Town of Knox, and Gallupville before eventually ending in Schoharie. From William E. Roscoe’s book, History of Schoharie County (1882), the goal was to connect Schoharie with the outside world, and “iron ties” (the railroad) had not worked, forcing them to try their second option of wooden planks. Roscoe then went on to describe the eventual fate of the road, saying that the “large amount of hard earned dollars invested” produced very little in return.

A more in depth look at the history and outcome is provided by Miss Gregg’s essay as it recounts specific details about the road’s history. She began by writing about the “Articles of Incorporation for Plank Road Association,” which discusses the formation of the Schoharie and Albany Plank Road Company and its ultimate goals. The company originally planned for the road to be constructed from the “last end of the Schoharie and Cobleskill Bridge, in the village of Schoharie…to some convenient point in the city of Albany,” and the estimated length was to be thirty-two miles. Eventually, the road ended at “the Great Western Turnpike at Hartman’s Corners near Guilderland,” with the total length being twenty-six miles.

There were five toll gates in total, spaced approximately five miles apart along the road. Toll Gate 3 was located at the “eastern end of the settlement of East Township.” Right next to the gates were the houses where the keepers would live, and Miss Gregg noted in her article that since the gates were closed at night, a person hoping to pass would have to wake the keeper. She also noted the size of the gate, claiming “passage was sufficiently large to allow a good-sized load of hay to pass through.”

Despite its goal to help connect Schoharie with other towns nearby, multiple factors worked together to bring about the discontinuation of the plank road. One of the main issues was the fact that the planks were constantly wearing out and in need of replacement. There was also the problem of an increase in the popularity of railroads, which diverted traffic from the road. Unable to make a profit from the road, Miss Gregg wrote that all those factors combined to push “the road towards its ultimate downfall.” Miss Gregg concluded her essay by noting “these turnpikes would have their revenge” as they transformed into the busy roads of 1932, in turn “pushing ‘the puffing iron horse’ from the map.” 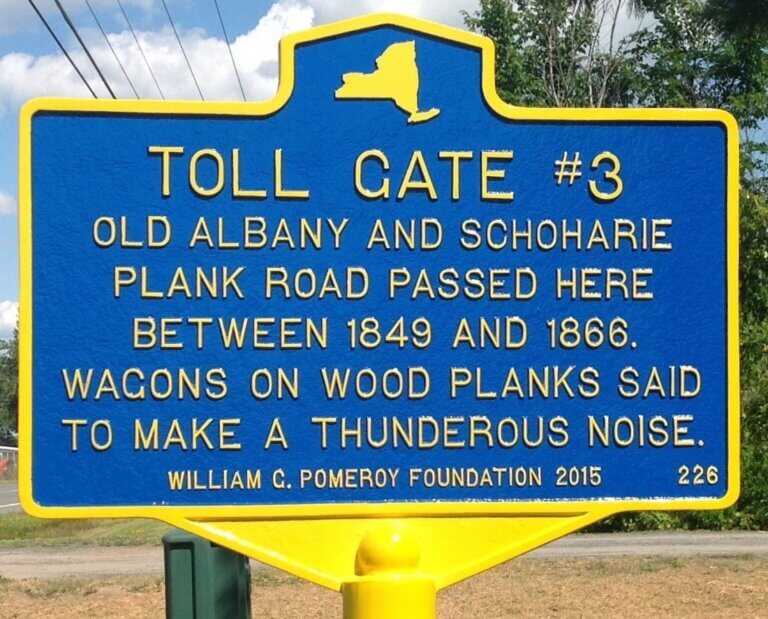 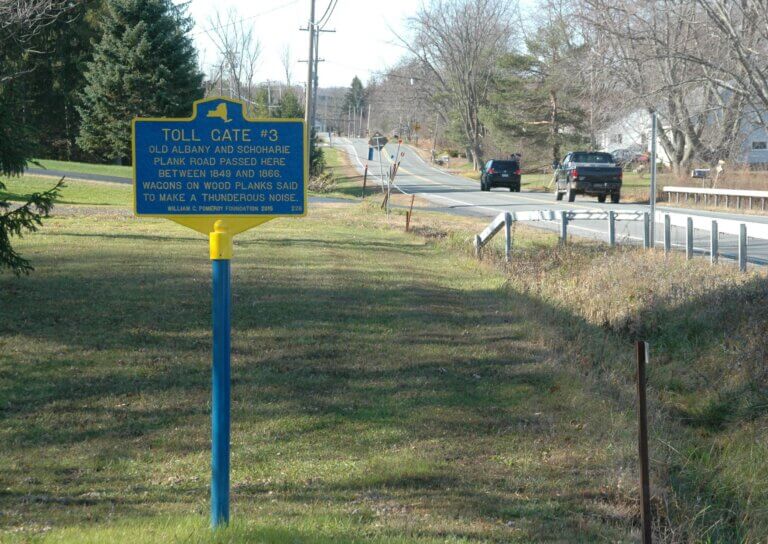