The Valley Junction train station was built circa 1913. It was a station for the New York, Ontario and Western Railway (O&W) and a connection between Kingston and Monticello railway branches.

The Annual Report of the Board of Railroad Commissioners of the State of New York, Volume 1 (1907) documented the stations on either side as in a state of ruin and without station agents, the Valley Junction station had a “ticket and freight agent and an express and telegraph office, and the facilities there afforded are… ample and convenient for all the residents in the locality.” Although the amenities as described were also noted as sufficient enough to serve business at the time, plans to replace the station with “a more commodious building as soon as the ground settles sufficiently to permit its erection, the structures now on an embankment” were also mentioned.

In 1868, Minisink Valley Historical Society notes that a new line, Port Jervis and Monticello Railroad was built north out of town and in 1895 was leased to O&W, the O&W also added a branch that ran off of the Port Jervis and Monticello and up to Kingston. At Summitville, it crossed the main line from New York City (Weehawken, N.J.) and points west. A timetable on Ontario & Western Railroad Historical Society website shows Valley Junction as the stop between Cuddebackville and Godeffroy’s on the Port Jervis Line. It is listed as 107.56 miles from Weehawken, telegraph call “VJ”.

The June 14, 2007 Hudson Valley Magazine article, “History Happened Here: Tracking the Mighty O&W” explains that the railroad flourished in the capacity of a tourist career to resort hotels and camps in the lower Catskills Mountain counties of Orange, Sullivan, and Delaware. In its heyday, on account of the railroad’s ambitious expansion program, including a 55-mile Scranton division, it also hauled milk, dairy products, mail, and most importantly anthracite coal from northeastern Pennsylvania. By the twentieth century, however, coal was starting to lose ground to petroleum fuels, natural gas, and electricity. In addition, “the decline in the importance of small towns and cities, the expansion of suburban industrial parks, and populations shifts to metropolitan areas or to other parts of the country were severely felt by ‘rural roads’ such as the O&W.”

Although O&W attempted to market itself as a merchandise bridge carrier, it continued to struggle in the post-World War II years. According to american-rail.com because of its financial struggles, the O&W was given derogatory nicknames such as “Old & Weary” and “Old Woman.” Even during the company’s existence it was mocked in financial circles, regarded as a run-down property with an unlikely future. Perhaps a Wall Street investor stated it best in the August 1942 issue of Trains Magazine:  “I must confess I cannot understand why some railroads were built…We will take, for example, the New York, Ontario & Western. This road really starts nowhere, goes nowhere, avoids all large industrial centers, and ends nowhere. When its anthracite mines folded up, the earnings of the road fell off so rapidly that serious financial difficulties soon developed…”

In 1957, Minisink Valley Historical Society continues that O&W became the first Class I railroad to be abandoned, the tracks torn up shortly thereafter. Then, in 1960, because of financial difficulties, the Erie Railroad merged with the Delaware, Lackawanna and Western Railroad to form the Erie-Lackawanna. A shaky 16-year union, in 1976 the Erie-Lackawanna was merged into the Consolidated Rail Corporation (Conrail).

In 2019, Orange County was served by the Port Jervis Line, a predominantly single-track commuter rail line running between Suffern and Port Jervis. At Suffern, the line continued south into New Jersey as NJ Transit‘s Main Line. The line was operated by New Jersey Transit Rail Operations under a working agreement with Metro-North Railroad. 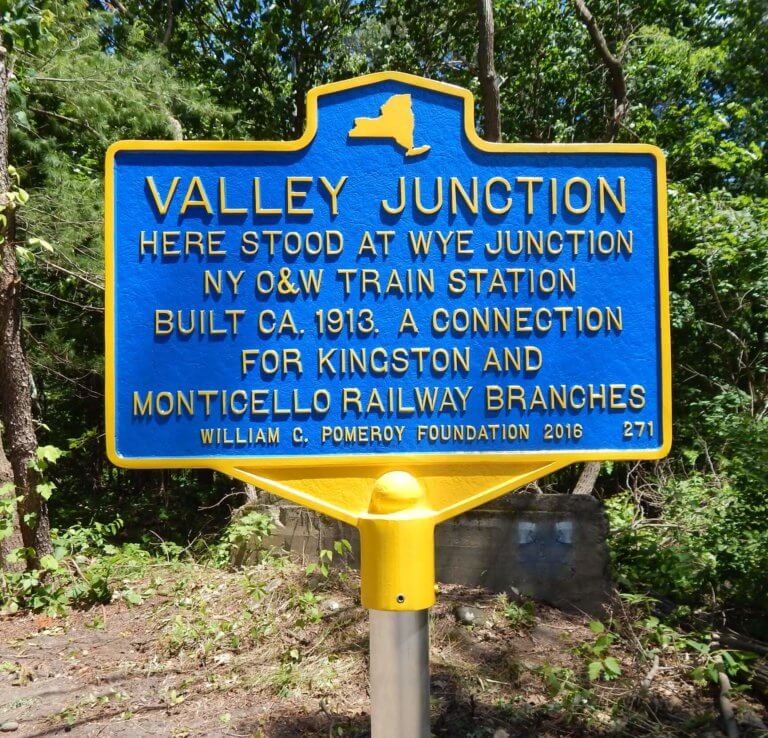