During the 1900s, a women’s organization known as the Mesquite Club held their meetings at the Las Vegas School. This club focused on local community improvements along with supporting the fight for women’s suffrage. One of the leading members of the Mesquite Club was Delphine Squires.

According to Delphine’s biography in the Database of National American Women Suffrage Association (NAWSA) Suffragists, she was born in Wisconsin in 1868. At the age of 21, she married her high school sweetheart, Charles Pember Squires. In 1905 they relocated with their children to Las Vegas, Nevada. With collaboration from his wife, Charles edited and published a local newspaper called the Las Vegas Age (Reno Gazette-Journal, 13 Aug 1958).

Per their website, the Mesquite Club formed in 1911 to, “cover a broad area of endeavors of social, civic, and philanthropic importance.” Delphine was one of the founding members. She served as the club’s president from 1912 to 1914 (Database of NAWSA Suffragists). According to a Yerington Times article dated August 10, 1912, the Mesquite Club was added as a member to the Nevada Federation of Women’s Clubs. With Delphine’s assistance, the Club sponsored suffrage speakers and attended women’s rights meetings both statewide and nationally.

The Mesquite Club played a hand in bringing social reformer Charlotte Perkins Gilman to Las Vegas in 1912 (Las Vegas Age, 26 Oct 1912). The following year, in 1913, the Club attended an event where Anne Martin, president of the Nevada Equal Franchise Society (NEFS), spoke. That same year the Legislature of Nevada approved a resolution that would potentially allow women to vote as long as the current voters, all men, agreed (Nevada Suffrage Centennial website, 2018).

A February 25, 1914 article in the Nevada State Journal announced Delphine’s election to serve as vice-president of NEFS. In June, “universal suffrage was given the stamp of approval by the General Federation of Women’s Clubs” (Christian Science Monitor, 15 Jun 1914). Several months later in October the Mesquite Club sponsored Dr. Anna Howard Shaw, president of NAWSA, when she visited Las Vegas to give a speech (Goldfield News and Weekly Tribune, 10 Oct 1914).

The Christian Science Monitor spread the word on June 20, 1915 about Delphine’s new role as president of the Nevada Federation of Women’s Clubs. At the annual session of the Federation, Delphine delivered a presidential address in which she emphasized the Federation’s membership of over 2 million women and how, with its influence and an ability to vote, how women could begin to change society (Las Vegas Age, 13 Nov 1915). This year also marked when Nevada women were able to vote for the first time in local elections (Nevada Suffrage Centennial website).

A year later, women in Nevada were permitted to vote in county and statewide elections. During a special session of the Nevada Legislature in 1920,  the 19th amendment to the Constitution was ratified, allowing all U.S. women to vote (Nevada Suffrage Centennial website).

Delphine continued to fight for women’s rights while improving her local community in Las Vegas until her death on November 21, 1961, at the age of 93 (The San Francisco Examiner, 22 Nov 1961). As of 2019, the Mesquite Club, was still active within the Las Vegas community. 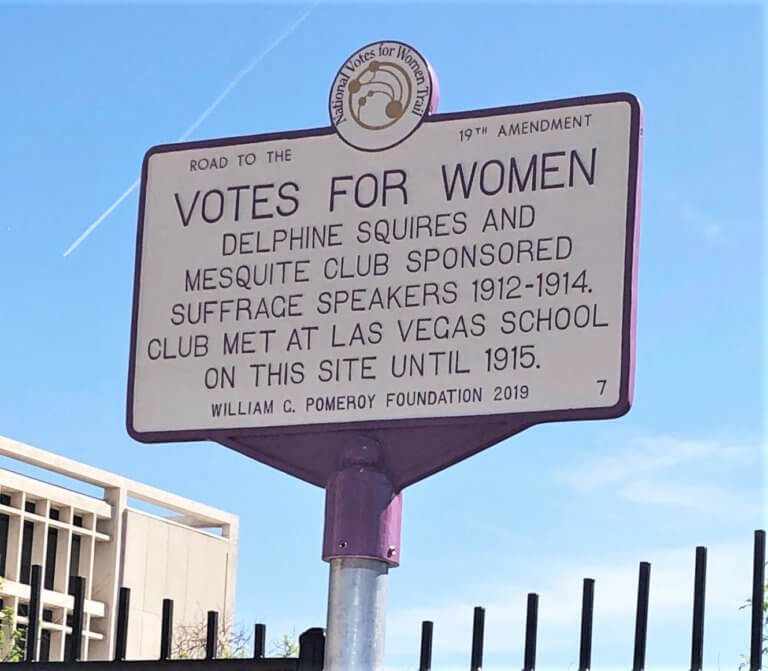