Sojourner Truth escaped from slavery with her infant daughter Sophia and walked five miles to the residence of Isaac and Maria Van Wagener. The Van Wageners were prominent members of the Dutch Reformed Church and opposed slavery. They provided Truth and her daughter with shelter. When Truth’s former owner came to force her to return, the Van Wageners paid off the remainder of Truth’s service to him with $25.

Sojourner Truth was born sometime between 1797 and 1800 in Swartekill, NY. Her name by birth was Isabella, and she was the daughter of slaves James and Betsy, called Bomefree and Mau-mau Bett. At the time of her birth, Sojourner and her parents were slaves under a Colonel Ardinburgh, who died when Sojourner was an infant. The colonel’s son, Charles Ardinburgh, inherited his father’s property, which included the enslaved Isabella and her parents. (Narrative of Sojourner Truth, 1850)

Young Sojourner Truth was later sold to trader John Neely, who was extremely abusive. She was then sold to Dutch Fisherman and innkeeper Martinus Schryver, and finally to another Ulster county landowner, John Dumont, in 1810. (Margaret Washington, 2009) Sojourner Truth would remain enslaved under John Dumont until the year before her emancipation by state legislation, which took place in 1827. (New Paltz Times, 1883) John Dumont had promised to free Sojourner Truth a year before the state manumission act in recognition of her loyal service. However, he broke his word at the last minute, claiming an injury to her hand decreased her productivity. Sojourner later recalled in her narrative that this tactic, to offer promises of freedom or permission to visit loved ones only to renege later, was commonly used by slave owners to manipulate and motivate slaves. (Narrative of Sojourner Truth, 1850)

Incensed and desperate for freedom, after remaining several weeks and performing what work she felt obliged to, Sojourner walked in the morning daylight away from slavery forever, taking refuge at the home of the Van Wageners. Though the Wageners did not support slavery, they agreed to help Sojourner by paying $20 for the remainder of her term of servitude, and an additional $5 for Sojourner’s daughter. (Narrative of Sojourner Truth, 1850)

After finally freeing herself from slavery, Sojourner set out to find one of her sons. During her time as a slave under Dumont, she had given birth to five children. Most would have been emancipated by New York legislation at the same time that Sojourner herself was. However, one of her sons was sold to a Dr. Gedney, who sold him to his brother, who then sold her son in turn to his brother in law, a planter in Alabama. (Narrative of Sojourner Truth, 1850) This would have violated an 1819 New York State law prohibiting the import or export of slaves across state borders. (Laws of the State of New-York, 1819)

With the aid of Quaker friends, Sojourner successfully filed suit and managed to have the court order the return of her son. She succeeded in spite of attempts to delay the proceedings, offer her a settlement, and issuing a writ on the brother of the culprit instead of the correct person. It was one of the earliest legal victories of its kind, foreshadowing many of the legal fights surrounding the trafficking of slaves between slave and free states in the antebellum era. At first, Truth’s son, having been physically abused and told lies about his mother, exhibited a Stockholm Syndrome-like attachment to his master, and denied that Sojourner was his mother. Gradually, once he was settled and convinced that Sojourner meant him no harm, he revealed that the calluses and marks across his face and body were the result of tortures and beatings by the hand of his former master. Sojourner recounted that, when confronting her former owners about the illegal sale of her son, she “…felt so tall within–I felt as if the power of a nation was with me!” (Narrative of Sojourner Truth, 1850)

Sojourner would go on to campaign and lecture widely for abolitionism and women’s rights, including her most famous speech, Ain’t I a Woman? A devout believer in God, Sojourner also joined a number of religious movements during her life. She adopted the name Sojourner Truth when she left New York City in 1843, saying that the spirit called her forth to sojourn for the truth. (Narrative of Sojourner Truth, 1850) She died in 1883 and bequeathed her home and belongings to her three daughters who lived with her. (New Paltz Times, 1883) 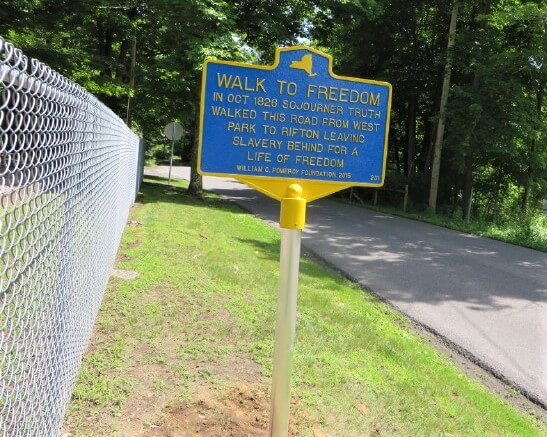 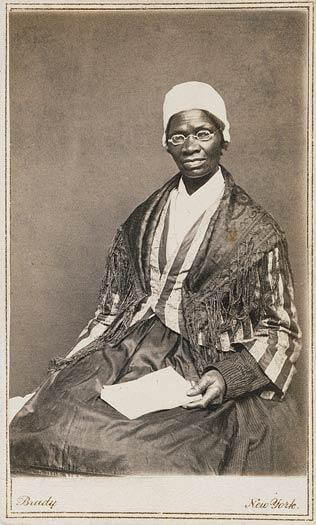