Incorporated in 1865, Wallkill Valley Cemetery was designed by noted landscape architect Downing Vaux. The burial ground is also the final resting place of Medal of Honor recipient and Congressman Thomas Wilson Bradley. Bradley’s Medal of Honor citation reads: Volunteered in response to a call and alone, in the face of a heavy fire of musketry and canister, went and procured ammunition for the use of his comrades.

Edward Manning Ruttenber’s History of Orange County (1881) describes Wallkill Valley as a “handsomely-situated cemetery a mile southwest of old St. Andrew’s burying ground. The grounds have been laid out with care, many fine monuments are erected, and much care is evidently being given to the proper adornment of the grounds.” Starting as 13 acres of plots, drives and walks, 26 additional acres were plotted by eminent landscape architect Vaux. In the early 1900s, according to the Historical Society of Walden and the Wallkill Valley, it was advertised as “The Most Beautiful Garden Spot of the Dead in all this Wondrous Valley.”

Walden’s 8th Annual Local History Day in 2009 recognized the cemetery. In an address given by Lisa Melville, Historical Society Trustee, explained the village had several early cemeteries, each corresponding with a different church. When Wallkill Cemetery was laid out, graves from both the Dutch Reformed and Methodist Churches were moved and reinterred. While it is “assumed that those cemeteries we know about had both stones and bodies relocated,” Melville pointed out that historically this has not always been the case. Sometimes the stones were moved to the new cemetery, and the bodies left behind at their original grave! For example, Eager’s History of Orange County (1846) notes that one stone may have related to the old church burying ground near St. Andrew’s Road. The stone with the inscription “Here lies the body of Mary, wife of John Green, who died June 17, 1752, aged 57” was discovered by Mr. George Dunn when he was out farming the land at a later date, and given to Wallkill Valley Cemetery Association. According to Melville the trustees placed the stone on the north side of the entrance to the receiving vault, and had an additional inscription cut to this effect.

Findagrave.com acknowledges Congressional Medal of Honor Recipient, US Congressman, Thomas Wilson Bradley. Bradley served in the Civil War as a Sergeant in Company H, 124th New York Volunteer Infantry. One of five honorees from his regiment, it was for his bravery at the Battle of Chancellorsville, Virginia on May 3, 1863. He received an officer’s commission soon afterwards, and rose to rank of Major. After the conclusion of the conflict, he entered the political ring, and was elected to represent New York’s 20th District in the US House of Representatives, serving from 1903 to 1913.

In 2019 the Wallkill Valley Cemetery was a non-denominational cemetery situated on 70 acres of natural landscape. Single and family plots were offered along with traditional interment and inurnment services. 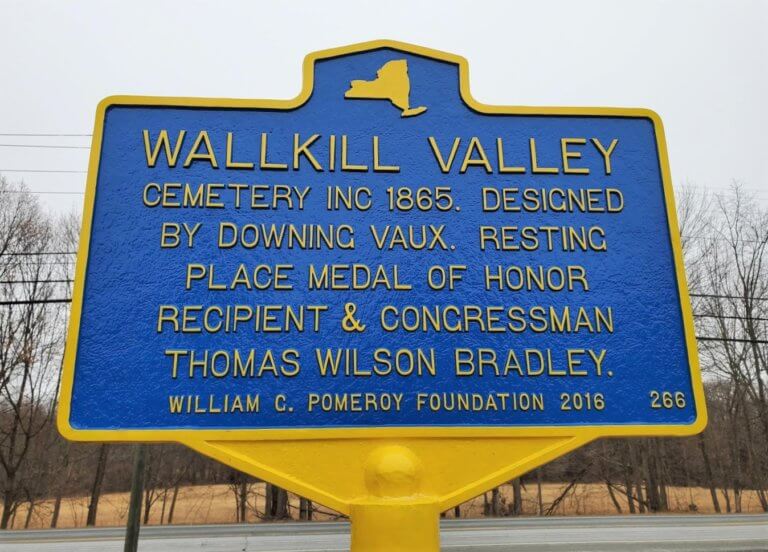 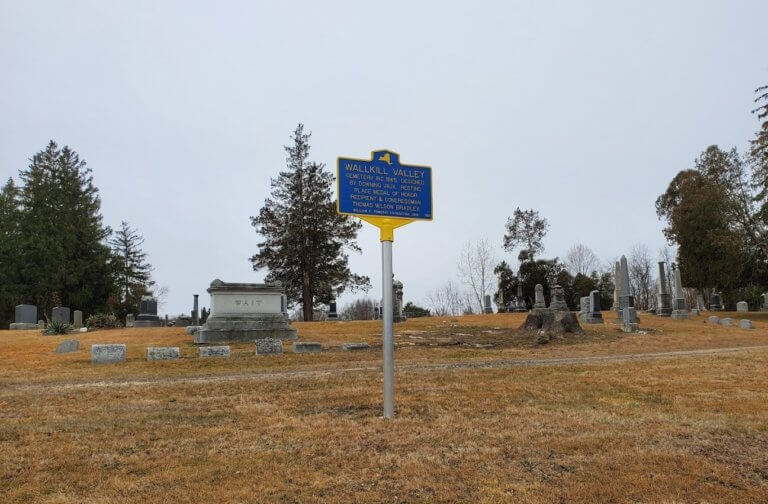 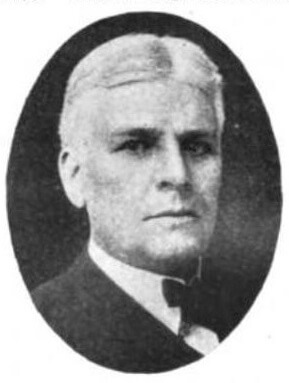