During the War of 1812, on Nov. 6, 1813, close to 7,000 U.S. troops left their boats, came ashore near this site, and marched around Ogdensburg. Local residents were enlisted to help move supplies. The army, led by General James Wilkinson, was making its way toward a rendezvous from which US forces would invade Canada, with the aim of capturing Montreal. This never materialized due to the defeat at the Battle of Crysler’s Farm, but the army suffered almost no losses in their maneuver around Ogdensburg.

During the year of 1813, a plan was formulated to invade Canada and take Montreal. One part of this invading army would descend from the St. Lawrence River, while the other section would join this first force from the direction of Lake Champlain. Immediately the operation ran into difficulties as it was delayed multiple times by weather unfavorable for the flotilla transports. It wasn’t until late October and early November when General Wilkinson was able to move the first part of the army, consisting of nearly 7,000 men, up the St. Lawrence River. On November 6, 1813, the Army began preparations for passing the fort at Prescott on the Canadian side of the river. (Hough, 1853) A local man, Louis Hasbrouk, wrote to his wife that the Army had been at French Creek two days earlier, and that he heard the cannons at Prescott fire off alarm shots as the US army neared from Morristown. He predicted “without doubt” that battle would come the next day. (Hasbrouk to Wife, 1813)

However, Wilkinson and his army planned to minimize casualties by having the soldiers land and walk around Ogdensburg, while the flotilla would proceed under the cover of night with only skeleton crews. This would provide the least opportunity for British artillery from Prescott to successfully fire on them. The soldiers would meet the flotilla the next morning on the other side of Ogdensburg to continue their movement towards the rendezvous point.

The location chosen for disembarking the soldiers was near the local Griffin family farm, the only place where a road accessed the St. Lawrence River bank between Morristown and Ogdensburg. (Map, Tate, 1829) David Griffin served in Wilkinson’s army at the time and later applied for a military pension in recognition of his service. (Griffin, 1871)

Wilkinson’s aide-de-camp recorded a grandiose proclamation addressed to the Canadians that the general recited after they disembarked on November 6. He assured them that the US Army, “…invades these provinces to conquer, and not to destroy…”, and that the US forces would respect Canadian subjects and their property if they remained “quiet at home.” While these promises would end up being moot, the speech nonetheless demonstrated the confidence Wilkinson had in his campaign’s success, or at the very least the optimism in its success that he hoped to impart on his troops. (Hough, 1853)

The soldiers and their supplies, particularly powder and ammunition, were disembarked and they began marching as darkness fell. Some locals were enlisted to help move supplies, and the military also requisitioned some of their livestock. (Rosseel, 1813) The Flotilla began moving around 8 p.m., with fog and night providing them cover. However, a change of weather lifted the fog and left the boats exposed in the moonlight. The British guns at Prescott began firing at both the flotilla and the marching soldiers for three hours, however General Brown ordered the boats to halt until the moon set, and losses were minimal. (Hough, 1853) While the artillery barrage was thunderous only one soldier was killed (Rosseel, 1813), and two injured. By 10 a.m. the next day, the entire flotilla of around 300 boats reached the meeting point with only two boats lost. (Hough, 1853)

The maneuver was successful and they managed to bypass the fort at Prescott with nearly no casualties. However, Wilkinson’s forces would soon after be defeated in the Battle of Crysler’s Farm, and the additional troops marching from Lake Champlain would never join them. The planned invasion of Canada was abandoned and Wilkinson was disgraced. (Hough, 1853) 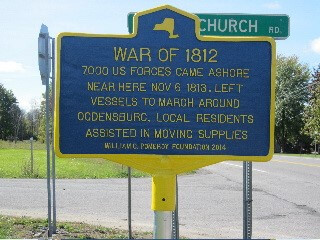