At the turn of the 20th century, Freeport was a summer resort. This first large summer hotel was built on this site by John J. Randall, called the “father of Freeport,” and William G. Miller, second president of Freeport. It was later sold to the St. Vincent de Paul Society for use as a charitable retreat for women and children from New York City.

The Freeport Memorial Library’s Local History Timeline notes that the Woodcleft Inn was constructed in 1897. An article, dated May 21, 1897, which appeared in the Queens County Review, mentioned the Inn was nearing completion. Already “[m]any city people ha[d]… secured accommodations… and the genial proprietor, Mr. Teatefrow, predict[ed] a successful season.” Meanwhile the canal, which was “rapidly being made by the powerful steam dredge” was expected to be an “immense boom not only to the hotel but to Freeport” has was projected to be complete the following month. A newspaper ad in the Nassau County Review from the same period, encouraged readers to “ch[oose] Woodcleft.” With “five feet of water at low tide,” it offered “good boating, bathing, [and] fishing” and the nearby Inn could accommodate 200 guests.

In connection to a life-saving incident involving three young women in the Woodcleft Canal, Documents of the Assembly of the State of New York, Volume 2, Issues 7-23 (1899), mentions Woodcleft Inn relative to its proximity to the canal. New York Heritage Project features a hand-colored picture postcard of the canal and inn, further illustrating the inn’s canalside location. The Documents note that the Mayor Van Wyck, who had been a guest of the inn all summer, was lounging on the veranda at the time. Upon realizing their dangerous predicament, “he in jumped over the rail, sprinted about two hundred feet, and, throwing off his coat as he ran, jumped into the deepest part of the canal.” By this juncture, word had reached the inn and the shore was soon crowded with bystanders: “All the women guests at the hotel, and all the male guests were loud in their praises of Mayor Van Wyck” and his life-saving exploit brought him many telegrams.

As early as June 28, 1907, there was mention in the Nassau County Review of the St. Vincent de Paul Society’s village water permit at the Woodcleft Inn “which the society [intended] to use as a summer home for poor children from New York.” Since they were also granted permission to construct a “four-inch tap for fire protection” done without cost to the village, their investment in the property would seemed established at this time. By August, 2, 1907, the paper announced the local G.A.R Post’s presentation of an American flag to the “new St. Vincent’s Home, formerly the Woodcleft Inn.”

The August 31, 2017 edition of The Freeport Baldwin Leader noted that “[t]he inn was abandoned in the early 1920s because the [St. Vincent de Paul] [S]ociety could not raise enough money to keep the home in operation. It was later demolished, and is now the site of Randall Park’s playground and swimming pool.” The December 28, 2017 edition of this same publication added that the location of the William G. Pomeroy Historic Marker, “commemorating the Woodcleft Inn, [was] once located in what is now Randall Park.” 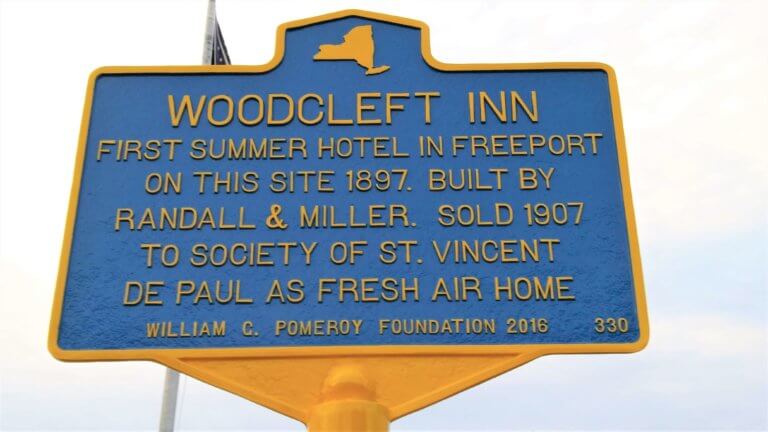