Daniel Sayre arrived in the hamlet of Shingle Kill, named for the stream that runs through the present day Town of Cairo, in April 1794. This marker was installed on land that was part of Sayre’s 100-acre purchase. He set up a tanning business with Samuel Jones, which provided him with the leather for his shoemaking. (Catskill Recorder, 1794) In 1799, the Presbyterian Church of Christ was organized in Cairo with Sayre as one of its first members. In 1803 the Town of Canton (present day Cairo) was established with Sayre elected as the first Town Supervisor, a position he held in 1803, 1804 and 1807. He also held the office of Justice of the Peace from 1800 to 1819. In 1804, he was elected to the State Assembly of New York and in 1806 became a judge on the Court of Common Pleas.

Daniel Sayre was born on May 10, 1765 in the town of Southampton on Long Island. (Sayre Manuscript) J.B. Beers wrote in 1884 that Daniel was a descendant of Thomas Sayre, who was one of the original settlers of Southampton and who built his house there in 1648. Daniel relocated in 1794 to what would become Cairo in Greene County New York. He purchased a farm of one hundred acres in Shingle Kill, where he began practicing the trades of tanning and shoemaking. (JB Beers). He would live in Cairo for the rest of his life, becoming a prominent member of the community. He died on November 15, 1840 at the age of seventy-five. A deeply religious individual, J.B. Beers wrote that Sayre’s epitaph bore the words “I know that my redeemer liveth.” (JB Beers, 1884)

Sayre married his first wife, Joyce Huntting, on June 25, 1789 (JB Beers, 1884), shortly before moving to Shingle Kill. Together they had eight children, four of whom would later die when their home burned down. (Sayre Manuscript) Joyce died on December 19, 1805 at the age of forty-four, (Catskill Recorder, January 1806) and Daniel remarried to Cynthia Huntington from Hartford, Connecticut a few years later on September 7, 1808. (Sayre Manuscript) Cynthia died nine years later on October 26, 1817. Daniel Sayre remarried a year later to his third wife, Deborah Kneeland, on April 27, 1818, but she tragically died after a little over two years of marriage on September 23, 1820. He married his fourth wife, Desdemona Willis, to whom he was married until his death, on February 20, 1821. (Sayre Manuscript)

As the paragraph above amply demonstrates, Daniel Sayre’s life was marked by the many tragic deaths of his family members. He wrote that the death of his grandmother in 1782 as well as the deaths of his grandfather and uncle in 1784 had the effect of “solemnizing” his mind after a relatively carefree youth. But the greatest tragedy of his life was the fire in 1808 that burned down his home and took the lives of four of his children.

Despite these deaths, he nonetheless became a prominent citizen in the realms of both church and government. Sayre credits his grandmother for imparting a deep-seated moral influence on him during childhood (Sayre Manuscript) and J.B. Beers wrote that he joined the Presbyterian Church in 1785 and became a “ruling elder” in his congregation in 1792. (JB Beers, 1884) A letter by Sayre to a friend in the year 1839, transcribed by J.B. Beers, explains that the Presbyterian Church in Cairo was organized on May 22, 1799 with 8 members, with 10 more joining soon after. The same fire which destroyed his home and claimed the lives of his children also caused the loss of his congregation’s records, and J.B. Beers states that church records were lost to fire twice more in subsequent years. (JB Beers, 1884) When the Reverend William Hoyt relocated from Connecticut to found the congregation in Greene County, Daniel Sayre was chosen as its Deacon. (Sayre manuscript) He remained committed to religious activity throughout his life.

Daniel Sayre was well known in his community for holding a number of public offices. He was appointed a justice of the peace in the year 1800 and performed this function for over twenty years. (Sayre Manuscript). He also was appointed a judge of the court of common pleas in 1806. (Catskill Recorder April 1806; JB Beers, 1884) He was unanimously nominated by the Republican committees of Greene County to represent Greene County in the State Assembly on April 5, 1804 (Western Constellation, 1804) and he was elected that same year. (Sayre Manuscript) J.B. Beers also cites from a town record that Sayre held the office of Town Supervisor of Canton (later called Cairo) in the years of 1803, 1804, and 1807, making him the town’s first supervisor.

Throughout his political career he was often involved with infrastructure and highway projects. For example, his signature as Justice of the Peace is listed on a charter incorporating a Catskill Bridge company in 1801, (Act of Incorporation, 1801) and a letter to Sayre from a commissioner of highways by the name of Joseph Reed lists multiple payments credited to Sayre for services on a number of projects. (Letter to Sayre by Joseph Reed) Additionally a remonstrance to the New York State Assembly of 1811 against a proposed turnpike which would pass through Cairo bears his name as the primary contact, demonstrating his continued involvement with local politics after his term as a member of the Assembly. (Journal of the Assembly, 1811)

While his home tragically burned down, as of 2019 this marker commemorates the location of his farm and his legacy as a notable member of Cairo’s early government and of the Presbyterian Church of Cairo. 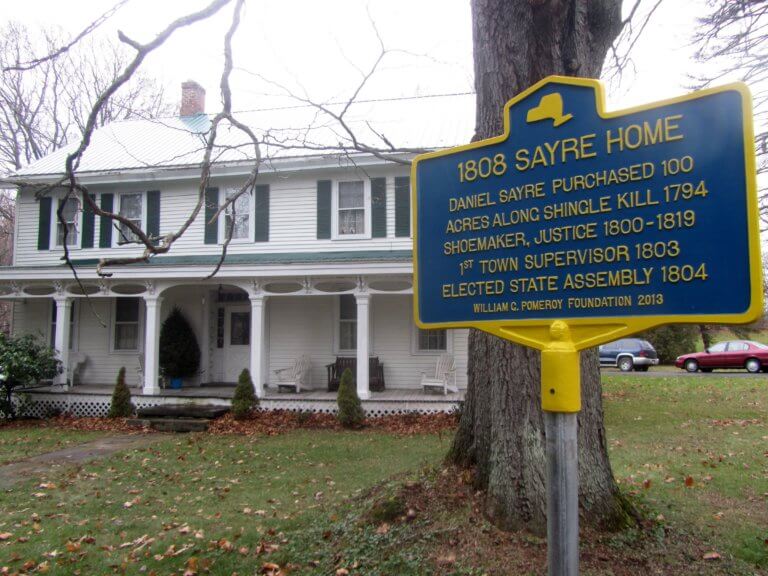