August Belmont was the founder and namesake of the Belmont Stakes, the third leg of the Triple Crown series of American thoroughbred horse racing. In 1867, he started a 1300-acre horse farm which featured a horse racing track, stables, trout pond, and mansion. After August Belmont Sr. (1816-1890) passed away, the property went to his son August Belmont II (1853-1924) until his death. Robert Moses, President of the Long Island Park Commission, helped secure the purchase of the Belmont Estate creating Belmont Lake State Park in 1926. The mansion was demolished in 1936 but remnants of the former estate still stand today.

In an April 30, 2018 article titled “August Belmont: Flamboyant Bander Influenced Business and Politics in Gilded Age New York,” Thoughtco.com profiled Belmont as “something of a rogue. He enjoyed late nights at the theater. And in 1841 he reportedly fought a duel and was wounded.” By the end of the 1840s, however, Belmont’s public image had changed. He came to be considered a respected Wall Street banker, and on November 7, 1849, he married Caroline Perry, the daughter of Commodore Matthew Perry, a prominent naval officer who commanded ships in several wars, including the War of 1812 and the Mexican-American War (1846-48). The wedding, held in a fashionable church in Manhattan, seemed to establish Belmont as a prominent figure in New York Society. That Belmont was thought to have one of America’s finest wine cellars as well as a noteworthy art collection are some other interesting anecdotes added by the article. In fact, in The Age of Innocence, Edith Wharton’s famous novel which captured this bygone era, the portrayal of wealthy financier Julius Beaufort may have drawn inspiration from Belmont as a character study.

The portrait above if not somewhat colorful paints Belmont as a man of leisure; of course, one may wonder where his fortune came from. Although he would become one of the “defining figures of America’s Gilded Age” he was neither American-born nor an old-moneyed member of the aristocracy.  According to Encyclopedia Brittanica the German-born Belmont entered the banking house of Rothschilds at Frankfurt on the Main at the age of 14, later transferring to the Naples office. In 1837 he emigrated to New York and opened a small office on Wall Street, where he served as the American agent to the Rothschilds before establishing his own banking house, August Belmont & Company.

The same source also notes that he took an active interest in Democratic politics. From 1853 to 1855 he served as chargé d’affaires for the United States at The Hague, the administrative capital of the Netherlands and the home of the court and government, and from 1855-1857 he served in the capacity of resident minister. Although he opposed slavery, he supported Democratic Senator Stephen A. Douglas, drafter of the Kansas-Nebraska Act, which mandated popular sovereignty among settlers as to whether slavery would be permitted within the new state’s borders.  After the American Civil War began, however, Belmont became a loyal supporter of Pres. Abraham Lincoln, exerting strong power of influence upon European merchants and financiers in favor of the Union. He went onto serve as chairman of the Democratic National Committee from 1860-1872.

Interestingly, from 1874-1920, LIRR Railroad kept a nearby station called Belmont Junction, another William G. Pomeroy Foundation marker. Since Long Island and Where to Go (1877), a descriptive work complied for LIRR patrons, featured The Belmont Stud Farm, a.k.a. “The Nursery”, as a tourist attraction, the station may plausibly have been named after Belmont.

In 2018, Town of Babylon History Museum was awarded the William G. Pomeroy Foundation state historic marker. As of 2019, the site continued to serve as Belmont Lake State Park. 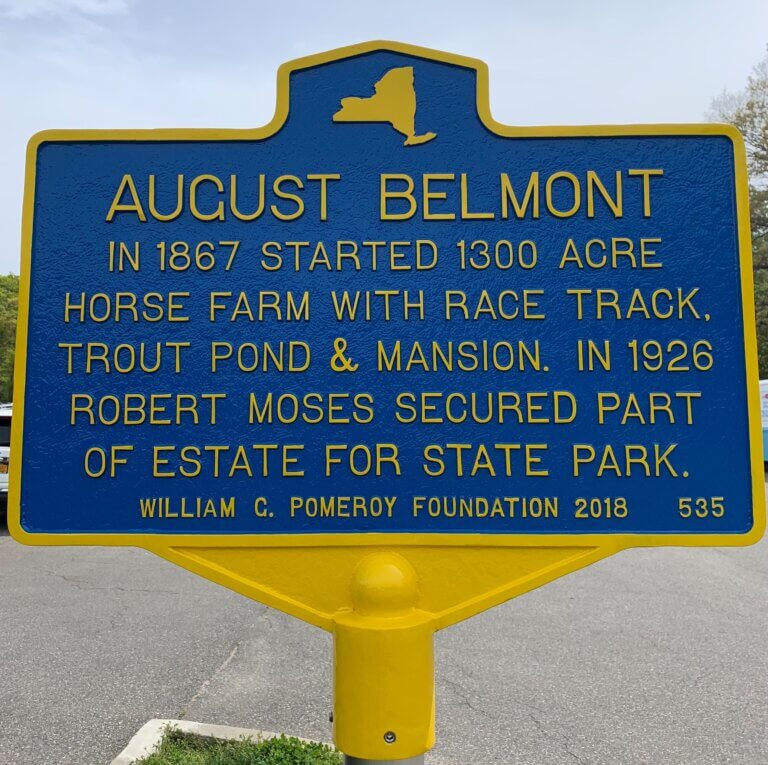 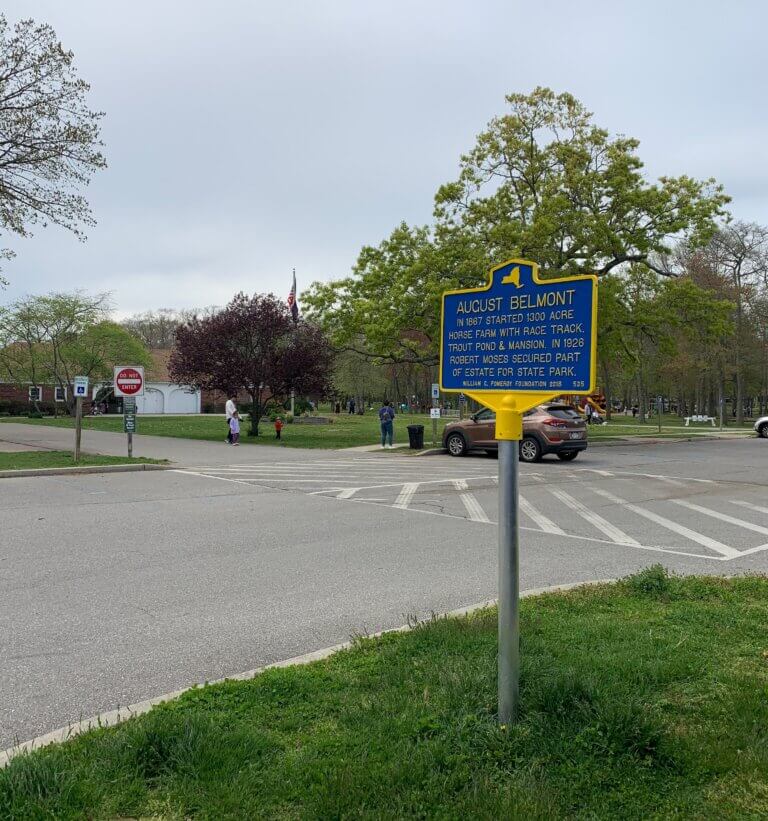 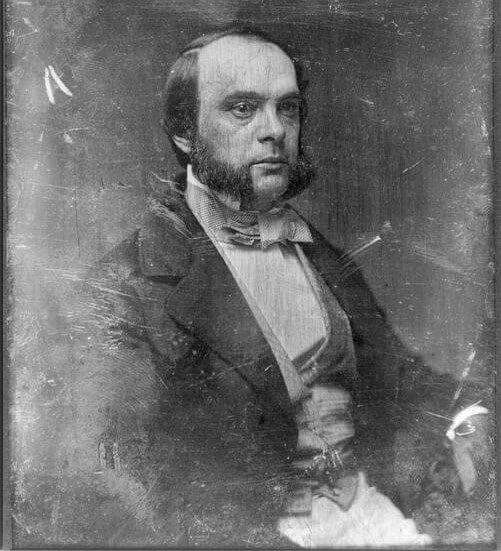