The British forces, led by General John Burgoyne, were in desperate need of supplies in the late summer of 1777. With the Continental stores just a short distance away in Bennington, Vermont, Burgoyne decided to send a detachment of British allied forces, led by German Lieutenant Colonel Friedrich Baum, to raid stores and gather supplies. Following his successful crossing of the Batten Kill River, Baum’s troops camped near this site by two houses opposite of the Estate of General Philip Schuyler.

Employing a foreign army to fight for another nation was not unusual in the eighteenth century, and the British had used German troops in wars prior to the American Revolution. Generally referred to as “Hessians,” Mount Vernon’s website states that the troops hired by the British to fight in the Revolutionary War were mostly from the Hesse-Cassel region of Germany. Formed entirely of independent principalities, German leaders would hire out their militaries to foreign countries in an attempt to bring in extra revenue for their states. The soldiers were known for the pride they had in “serving their prince and their people” and were trained in a “system aimed to instill iron discipline,” with severe punishments for failing to live up to expectations. Around 30,000 of these troops were then hired by the British to fight in North America during the Revolution.

The German forces were used throughout the war in strategic battles, and based on an order from British General John Burgoyne, were the primary force behind an attack on the Continental supplies kept in Bennington, Vermont. An account by German officer Friedrich Adolphus Riedesel states that Burgoyne had received information that the stores held in Bennington were guarded by a small militia and believed that if he dispatched a detachment of troops to attack them, the rations could be captured. Riedesel was adamantly opposed to that course of action, believing that the American forces were too close and Bennington too far to make it worthwhile. Despite the doubt, Burgoyne went ahead with his plan and sent out a German Lieutenant Colonel by the name of Friedrich Baum to lead troops from Fort Miller in New York to Bennington.

The road to Bennington involved crossing the Batten Kill River, which was noted in the journal of J. F. Wasmus as being a “most unpleasant and dangerous undertaking.” The German company surgeon continued on stating that once everyone had successfully crossed, camp was set up in a way that placed the Hudson River to their right. The camp also happened to be situated directly across the river from the first church the men had seen since Canada, and Wasmus noted that they were in what was known as the parish of Saratoga. Along with the church, Wasmus stated that there were several buildings belonging to American General Philip Schuyler, including five “large barracks of identical construction” built for Schuyler’s workmen, as well as two “beautiful houses” that Baum and his men camped bedside. Wasmus observed that despite the buildings, farms, and animals that were in the area, it was completely deserted. The surgeon believed that the people’s “enmity against the King of England and the fear of the Germans” had driven them out of their homes and into the nearby woods.

As of 2019, the marker stands near the area that Lieutenant Colonel Friedrich Baum and his men camped on their way to Bennington. It is part of an interpretive driving tour called “The Road to the Battle of Bennington.” 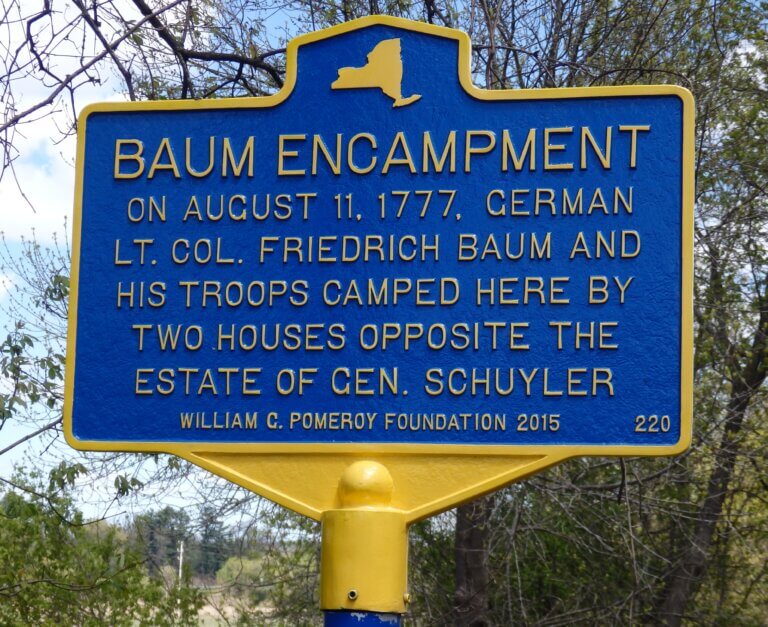 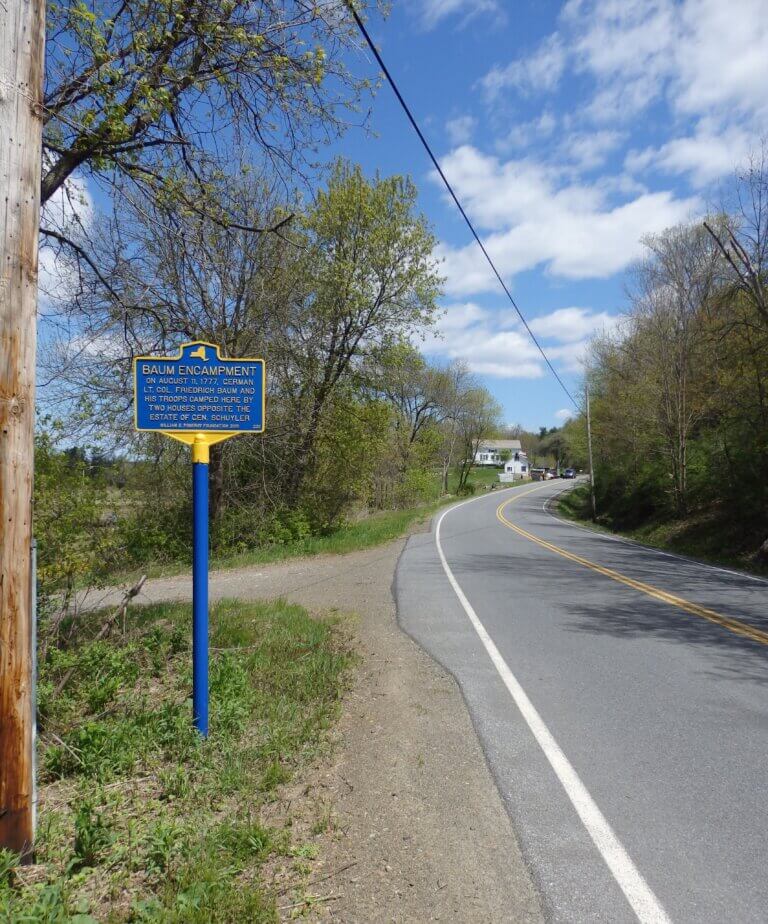