During the American Revolution in 1777, the British, along with their Native American, Loyalist, and Hessian allies, launched a campaign against the Empire State (NY), with the hopes of dividing and conquering the colonies. Due to unforeseen circumstances, however, the British faced setback after setback. By late summer of 1777, British forces had dwindling numbers of troops and were in desperate need of supplies. Near this site on August 11, 1777, Lieutenant Colonel Friedrich Baum successfully led his troops across the Batten Kill River into Vermont to raid the Continental stores at Bennington.

Though the Revolutionary War was a battle for American independence from Great Britain, it was not fought between just Colonial and British forces. Part of the British strategy for the war was hiring foreign armies to fight under their command, and at the time, German military forces were popular for-hire troops. Mount Vernon’s website states that the British brought in about 30,000 German troops to fight during the American Revolution, and they eventually came to be referred to as Hessians due to the fact that a large number of the soldiers came from the Hesse-Cassel region of Germany. At the time of the Revolution, Germany was not a unified country, but rather a region of independent principalities that shared a common language and culture. These small, independent states needed ways to create revenue, and for some of them, hiring out their army could bring in an amount of money equivalent to 13 years of tax revenue.

The German forces hired by the British were involved with several major battles throughout the war, including the failed attempt to raid Continental stores in the town of Bennington. Under the command of British General John Burgoyne, a German Lieutenant Colonel by the name of Friedrich Baum was ordered to lead a force to Bennington where much needed supplies and rations could be found. Another German officer, Friedrich Adolphus Riedesel, recorded the events in his journal and stated that he had advised Burgoyne against sending Baum and his men to Bennington. Riedesel believed that the town was too far away and American forces were too close, but Burgoyne believed that the stores were lightly guarded by a militia and thought a direct attack would be effective.

Riedesel continued describing the expedition, noting that the road to Bennington was “very bad, and led through a dense woods,” which required a Loyalist supporter from the area to help guide Baum and his troops. The Loyalist guide was also quick to warn about the dangers involved with the proposed plan and claimed that “the Americans would exert themselves to the utmost to hold their position.” Nevertheless, Burgoyne was determined to see the stores at Bennington captured, also believing that an attack there would keep reinforcements from interfering with a siege British Colonel Barry St. Leger was conducting at Fort Stanwix.

As Baum followed the orders of Burgoyne, he was forced to lead his men across the Batten Kill River, which, according to the journal of J.F. Wasmus, did not have a bridge. Wasmus was a German surgeon who traveled with the troops, and as he recorded his daily experiences, noted that the lack of bridge forced the men to walk through waist deep water that was “most unpleasant and [a] dangerous undertaking.” The current was said to be fast and made it hard to keep balance, but once across, the troops made an encampment on American General Philip Schuyler’s land.

The marker stands near the area where Lieutenant Colonel Friedrich Baum and his men crossed the Batten Kill, and is part of an interpretive driving tour called “The Road to the Battle of Bennington.” 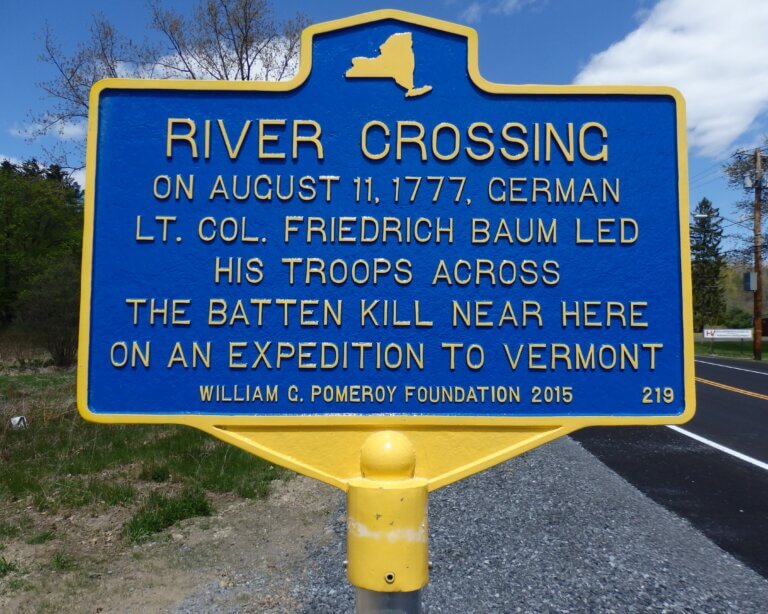 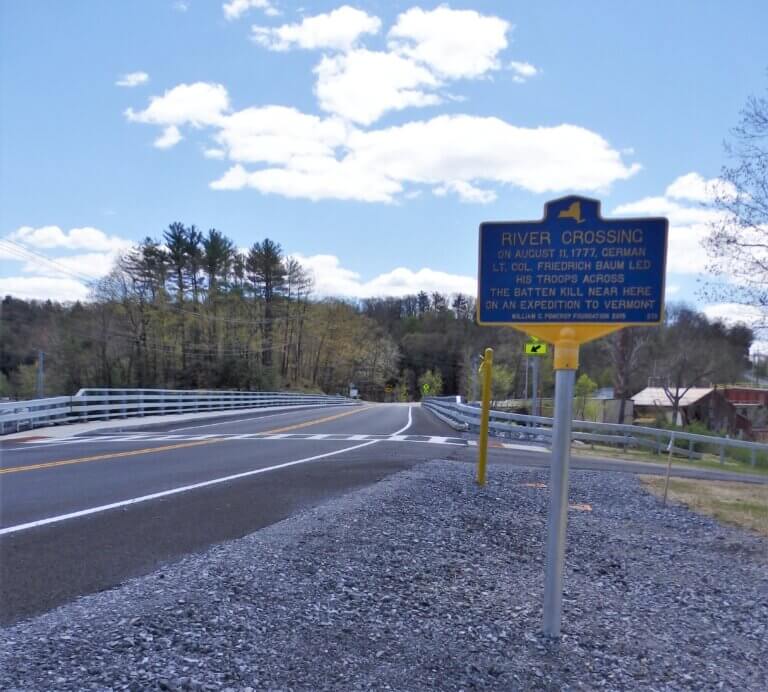