Clintonville was a once-bustling industrial community and home of the Peru Steel and Iron Company from 1833-1890. Located along the banks of the Au Sable (now known as Ausable) River, the Company’s bloomery forge was a large, rectangular, stone building, which featured 16 fires, making it one of the largest bloomery forges in the region. These fires were used to smelt iron ore and produce wrought iron until the 1890s.

The bloomery forge located in Clintonville was part of the large Peru Steel and Iron Company, which was described by the Plattsburgh Sentinel on April 17, 1875 as being able to depend “mainly upon its own measures.” The article then goes on to describe the setup of the company, beginning with the structures built near the upper dam of the Au Sable. Along with a saw mill, grits mill, rolling mill, and foundry, the company possessed wheelwright, carpenter, and blacksmith shops, among other things. These different buildings helped the company to produce their own wagons, machinery, and apparatuses that were required to do the work they needed in the mines and forge.  About a half mile below that, on the lower dam, was where the water was sourced to help power the forge and separator used in the smelting process, which used ore mined from Palmer Hill about five miles south west.

Within the Peru Steel and Iron Company, the bloomery forge played an important role in the production of wrought iron. The process, as described in Iron in New York (2018), was meant to take magnetite ores that possessed high iron content and was low in undesirable impurities and create iron. That iron could then be used in products such as anchors, chains, railroad car axels, and nails. The ore was called “raw or ‘primitive’” when it first began the process, and the goal was to remove as much excess rock and mineral to make the substance pure.

One of the first methods attempted to separate the ore from the impurities was a magnetic ore separator. It was constructed in the early 1830s but eventually shut down because it was seen to be wasteful and expensive. It was replaced by a water separation method that was set up next to a half mile long canal along the Au Sable River. The process was said to begin with the stone being roasted over kilns in order to help release the ore. Once it was cooled, the ore was then stamped with hammers in order to crush it, and from there, it was deposited into sieves and lowered into water. As the sieve was shaken, the ore, due to its weight, would fall to the bottom and into a trough, and the left over sand would be scraped off and deposited elsewhere. The troughs were then emptied and moved to the forges.

At the time the bloomery forge in Clintonville was in operation, a lot of iron produced was being converted into cast steel. This led to a rise in steel production in the U.S in the 1860s and 70s, and the New York Adirondack-Champlain iron production was a large contributor. The majority of the bloom iron produced in America actually came from the Adirondack-Champlain region, with the area producing 84% of total bloom iron output in 1880. Forges such as the one operated by the Peru Steel and Iron Company were able to sustain their production due to factors such as the high quality ores they mined, their proximity to water-power resources, and the relatively low operational costs. Iron operations did begin to decline in the area beginning in the late 1880s, and it has been attributed to high tariffs and severe financial depressions that affected the entire country from 1882-1885 and 1892-1896.

As of 2020, the marker stands at the closest paved, public access road near where previous archaeological excavations have shown the forge once stood. 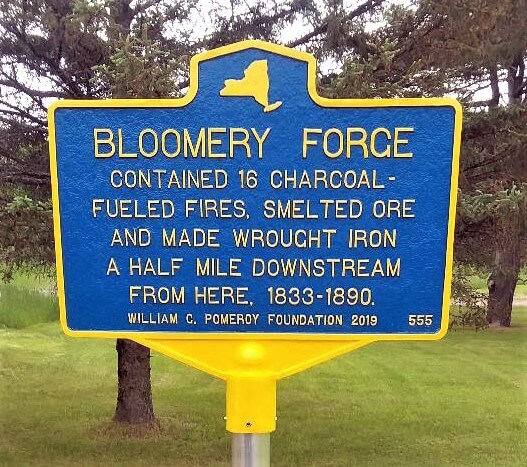 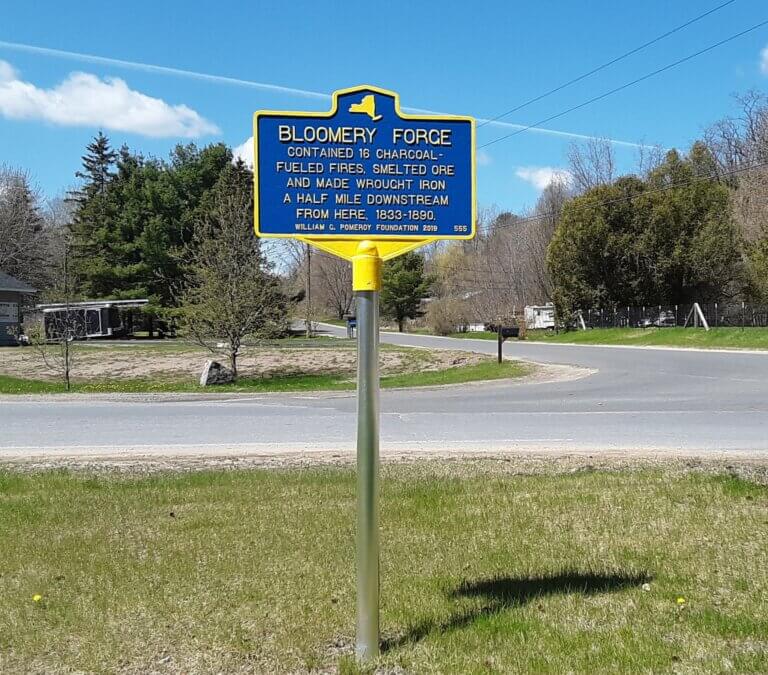