At the start of the World War I, the United States maintained a stance of neutrality; however, due to a series of events, the U.S. joined the fight on April 6, 1917. Within a short period of time the country quickly mobilized for war. On Long Island in the town of Babylon, in June 1918, August Belmont II (1853-1924), leased 280 acres of his sprawling estate, including the Belmont Horse Racing Track, to the United States government to serve as an airfield. From the summer of 1918 until early 1919, barracks and hangers were constructed to accommodate the men from 261st and 350th aero squadrons that were stationed there. This airfield known as Camp Damm was named after Lieutenant Henry J. Damm, who was killed in action on May 2, 1918. Camp Damm remained active through the duration of the war and was subsequently abandoned in early 1919.

Although a July 25, 1918 article in The Brooklyn Daily Eagle announcing French language instruction for soldiers still referred to it as the “Belmont Aviation camp”, the very same edition reporting on the Long Island Flying Grounds designated “the fourth [aviation] field… the only field containing the full name of the person after whom it is named. It will be called the Henry J. Damm Field. The using of the whole title is obvious.” To explain why the article-writer may have considered such memorialization “obvious”, John Carver Edwards’ Orville’s Aviators: Outstanding Alumni of the Wright Flying School, 1910-1916 (2009) recounts the story of Damm’s demise:

On May 2, 1918, Major Brindley and… accompanying colonel, Henry J. Damm, arrived at South Field to test a DH-4. After a friendly round of greetings with former pupils… the major climbed into a deHavilland and took off on a series of projected tests. On his second flight the plane’s engine seized, and Brindley and Damm plunged to their deaths in full view of scores of onlookers.

A ca. 1918 picture postcard titled “Greetings from Belmont Park Aviation Field, Babylon, L.I.” from the collection of the Village of Babylon Historic and Preservation Society depicts four military personnel walking along a line of grounded planes. Christopher M. Collora’s Long Island Historic Houses of the South Shore (2013) adds that during World War I, it was the US Army Air Corps which used Belmont’s estate, or Camp Damm, as an airfield to train pilots. About 1,200 mechanics and pilots were encamped on the property.

According to Long Island: A History of Two Great Counties, Nassau and Suffolk, Vol 1 (1949) the Army encampment from the 280-acre land lease included the famous Belmont mile-long race track. Camp Damm formally opened on June 13, 1918 to the 261st and 350th aero squadrons under command of Lieutenant Harold P. Mills. The source adds that for the next eight months, there was intense activity at the camp and its aviation field, and corroborates Collora’s number of 1,200 men quartered there. The people of the Babylon, thinking of their own hundreds of men in service, made every arrangement possible for the pleasure and comfort of the “boys at Camp Damm”.

As of 2019, the former site of Camp Damm was part of nearby Belmont Lake State Park. 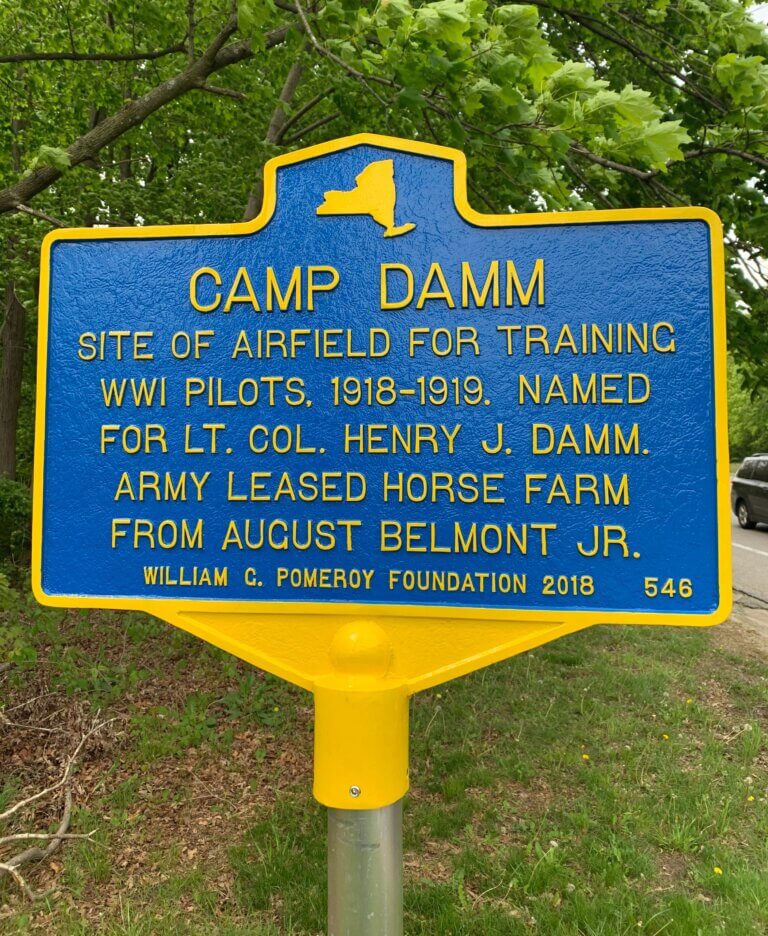 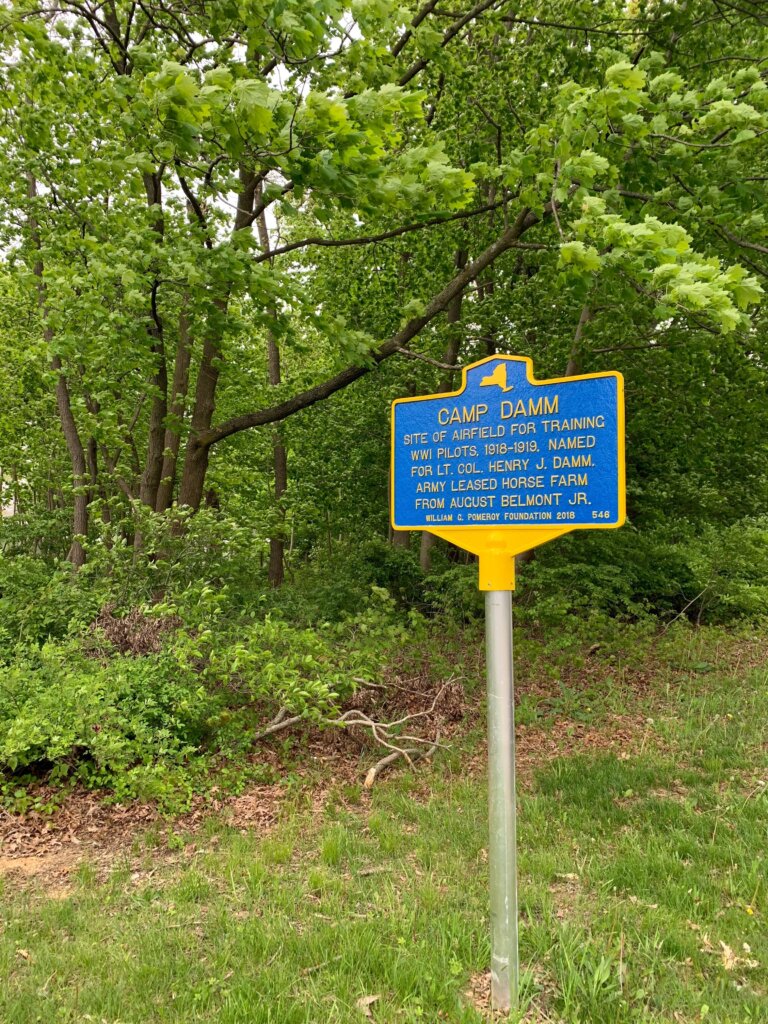