Built in 1883, the County Farm was Greene County’s solution to tackle poverty and sickness in the community. The farm housed the sick and destitute of Greene County and provided residents with agricultural jobs. After closing in 1962, the building was converted to a county office building.

By 1852, the poorhouse held 244 residents listed in its record book of that year, as transcribed by Sylvia Hasenkopf. A large portion of “inmates”, as they were referred to, had the cause of their entrance listed as poverty, with smaller numbers held for mental illness or disability (at that time called “lunacy” or “idiocy”), as well as some individuals for advanced age or illness. However the largest proportion of inmates, eighty-six, were counted as “intemperate”. (Cairo Almshouse, 1852)

Poorhouses of the era were intended to be a place for curing the ill or reforming the impoverished (“paupers”) and alcoholic (“intemperates”). However, inmates could often be held in conditions similar to imprisonment, particularly those with mental disabilities. An 1857 report to a New York State Senate committee investigating state supported charitable institutions decried the conditions they found in poorhouses throughout the state, including abuse of mentally disabled patients and decrepit housing. Unfortunately, the Greene County Alms House was no exception and the report cited appalling conditions. Of eleven “lunatics” in the home at the time, six were reported to be confined in cells with only a single small air hole in the door. Five were also chained around the arms and legs within their cells. The committee report states of the mentally disabled at the County Home, “They are in a wretched state. None (emphasis original) are cured or improved, a result certainly to be expected from their present treatment.” The report further relates that the whole house was “illy constructed” and extremely poorly ventilated. (Report to NYS Senate committee, 1857)

A Greenville Press article from 2002 suggests that these conditions may have been an impetus for the construction of a new building. In 1883, Greene County constructed a 2-story brick structure with two wings, one for men and the other for women to replace the former decrepit facility. (Commemorative plaque, 1883) The new County Farm aimed for self-sufficiency.  Many of the inmates worked cultivating the grounds and maintaining the buildings. During the 19th and early 20th century, expenses were offset by proceeds from agricultural activities. (Annual report to state board of charities, 1895)

The demographics and farming activities at the Greene County Alms House remained fairly consistent from its construction into the first decade of the 20th century. (Cairo Almshouse, 1887, 1905) However the importance of inmates’ labor seems to have gradually diminished. Dear Old Greene County, a book published in 1915 detailing the history of the county, claims that, under the management of a Mr. Ira Tolley and his wife, only four other persons were responsible for both the care of the inmates as well as the agriculture and upkeep of the establishment. The book also claims that Mrs. Ira Tolley was the great great granddaughter of James Barker, the original recipient of the six thousand acre land grant on which the town is located.

While the book aims to present the county alms house in a friendly and inviting manner, newspaper articles from the Catskill Recorder and Standard Mirror-Recorder in 1925 show a public dispute over the conditions of the home. A Reverend H.B. Fisher, who visited the home, wrote a letter to the Catskill Recorder asserting that the building was in dire need of repairs. In addition to a chronically leaking roof, the reverend claimed that farming practices were poor and had the potential to produce many more supplies for the inmates, as well as lamented the 19 deaths of the previous year as excessive.

The County Farm continued, however, until 1962 when the Board of Supervisors of Greene County unanimously passed a resolution to close the home on June 1, 1962. In 1963, the county’s public health committee requested that nurses in the former county home be moved to other facilities. On July 19, 1963 the building committee of the board recommended that Greene County lease a portion of the old county home to the Cairo central school district for a monthly rent of $300. (Journal of Proceedings, 1962, 1963)

Since then the building has continued to host many county offices, including those of Planning and Youth Bureaus and Cooperative Extension. (Greenville Press article, 2002) 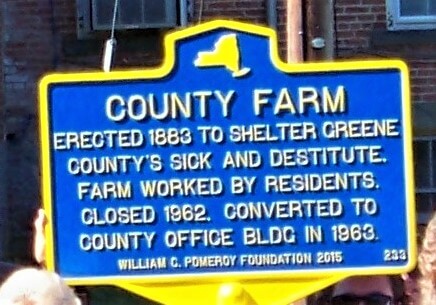