Nelson B. Greene (1869-1955) was a prominent local historian, author, illustrator, and editor. His most famous work, History of the Mohawk Valley: Gateway to the West 1614-1925, is a four-volume research of the six counties that form the heart of the Mohawk Valley and includes illustrations by Greene. His former home became known as The Greene House Inn.

The Greene House is situated at the intersection of West and Mohawk streets, in the Village of Fort Plain. It is named after its former occupant, Nelson Greene, who was an author, illustrator and editor. He largely focused his career on the Mohawk Valley region of New York State. An Evening Recorder article from November 12, 1955 recounts the details of Greene’s life after his passing. He was originally born in Herkimer County on November 7, 1869. As a child, he moved with his family to Fort Plain, NY in the mid-1870s. His father, Horace Greene, assumed ownership of the Mohawk Valley Register, believed to have been oldest local newspaper at the time. Young Nelson attended the Clinton Liberal Institute, a coeducational school in the village. In 1893, his father passed away and Greene took over the Mohawk Valley Register for a few years. An article from the January 20, 1893 edition of The Mohawk Valley Register lists Greene as its manager. Despite this, he decided leave Fort Plain to pursue a career studying art in New York City (Evening Recorder).

Greene was a talented artist, resulting in the publication of many of his illustrations. He painted several covers for Puck, a humor magazine published from the late 1800s to early 1900s. On a business card from the early 1900s Greene lists, “a few accounts for which I have made important drawings,” including: Colgate, American Tobacco Company and Indian Motor Cycle. The Evening Recorder credited Greene with assisting famous sculptor, Philip Martiny, to construct the sculpture called “Allies United for Liberty”. It was built in New York City to symbolize the anticipated American victory during World War I (Hover Institution Library and Archives, 1917-1918).

In tandem with his art career, Greene authored books on historical subjects which featured some of his illustrations. In 1915 he published The Story of Old Fort Plain and the Middle Mohawk Valley, which included five maps he drew himself. In 1924 he finished The Old Mohawk Turnpike Book and a year later published History of the Mohawk Valley, Gateway to the West, 1614-1925, which was a total of four volumes of work (Evening Recorder). Greene continued to work on his books when he returned to Fort Plain in the early 1920s. The primary reasons for this homecoming were to assist the local publishing company, O’Connor Brothers Inc. and to serve as editor for the Fort Plain Standard newspaper (Evening Recorder).

The Greene House (as it is presently known) served as Greene’s main residence in Fort Plain. He lived there with his wife, Lillian and their family. During his time back in Fort Plain, the Evening Record makes mention of his vital role in the formation of the Community Club and the Mohawk Valley Towns Association. Greene passed away in 1955 at the age of 86.

In 2015, Greene House was purchased by a couple who converted the property into an inn. They named their establishment the Greene House Inn, in honor of its former inhabitant. As of 2019, the inn was still in operation and the innkeepers even displayed some of Greene’s unpublished works inside (The Green House Inn website, 2018). 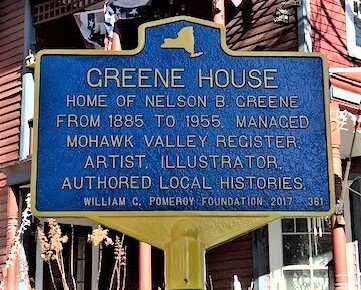