Revolutionary War patriot and veteran James Dean built his home at this site in 1787. Dean served at Fort Stanwix and signed the 1784 treaty in present day Rome, New York, which formalized peace between the six nations. Dean was also an interpreter and counsel for the Native American Oneida tribe who lived in the area.

The 1867 book Sketches of the Alumni of Dartmouth College, edited by Reverend George T. Chapman, recounts Dean’s date of birth on August 20, 1748 in Groton, Connecticut to John Dean and Sarah Douglass. According to Annals and Recollections of Oneida County, written by Pomroy Jones in 1851, around the age of twelve Dean was, “sent to reside at Oquago on the Susquehanna, with an Indian missionary, named [Rev. Ebenezer] Mosely, who was then laboring with a branch of the Oneida tribe.” Here, he mastered their language and was adopted by a female tribe member as her son.

As a young man, Dean attended Dartmouth College and graduated in 1773 (Sketches of the Alumni of Dartmouth College). In the following years he traveled on missions, proselytizing the word of God. Annals and Recollections of Oneida County recounts Dean was “recommended to the continental Congress… as a suitable person to ascertain those of the Indians in New York and Canada, and the part they would probably take on the event of a war with the mother country.” The Colonies hoped Dean could “conciliate the northern tribes in their favour” (Sketches of the Alumni of Dartmouth College). Henry Cookinham’s 1912 book, History of Oneida County, New York: From 1700 to the Present Time, mentions that during the Revolutionary Way, Dean was “appointed Indian agent with the rank of major and rendered invaluable services. He was mainly stationed at Oneida Castle and Fort Stanwix.”

The Annals and Recollections of Oneida County goes on that after the war, around 1784, “the Oneidas gave Mr. Dean a tract of land two miles square, the title to be confirmed and ratified by this state.” Dean built a log cabin on this land, however, in 1785 the land flooded. He asked the Oneida Nation for a different tract of land, which they granted him. That new tract is located in present day Westmoreland, NY and measured “two miles square and contained 2560 acres (History of Oneida County, New York). On February 6, 1787, Dean’s land patent was confirmed and signed by Governor Clinton (Observer Dispatch, 16 Feb 1941). Over the next few years, Dean cleared the land and built his house with his wife, Lydia Camp and their children (Guide to the James Dean Letters, Special Collections Benjamin F. Fienberg Library SUNY Plattsburgh, 2007).

James Dean was a prominent member of his community during its formative years. According to History of Oneida County, New York, the first Westmoreland town meeting was held at Dean’s house in the early 1790s. This book also mentions that he was a member of the Board of Supervisors for the County in 1795 and again in 1798. The Guide to the James Dean Letters, stated that Dean was “one of the first five judges,” in Oneida County and continued to do so until around 1813. He was a Delegate to the Constitutional Convention in 1801 and twice elected to the New York House of Assembly in 1803 and 1808 (History of Oneida County, New York).

Dean passed away on September 10, 1823 (Sketches of the Alumni of Dartmouth College). As of 2019, the house was a private residence, believed to be over 230 years old. 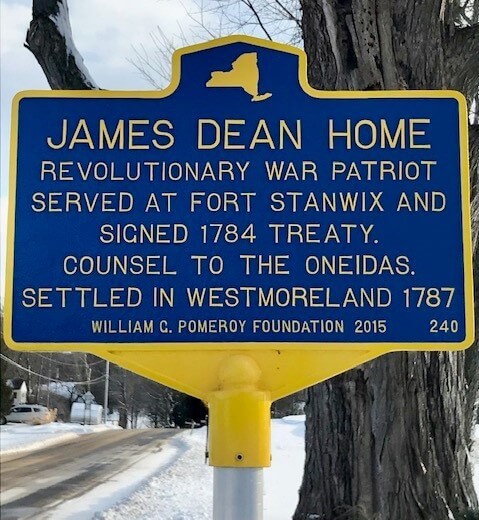 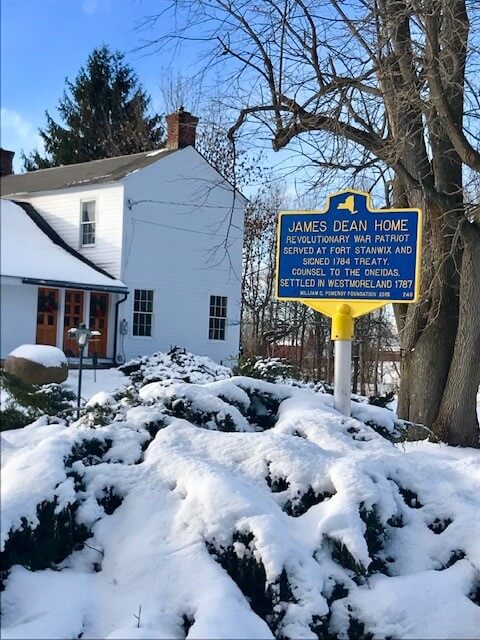