Prior to the invention of television and internet, the circus provided the American public with a live spectacle often unlike anything seen before to those in attendance. During the 19th century, the United States was still a developing country. While cities were sprouting up and growing, not many at that time were large enough to sustain a year-round, permanent circus act. As a result, circus acts took to the road and rails in order to reach a greater audience and generate a sustainable income. Once such act was the Sells Brothers Circus, whose fateful visit to the City of Ronceverte, West Virginia in 1906 would be discussed among its residents for generations to come.

Four brothers, Lewis, Ephraim, Allen and Peter Sells came together to create the Sells Brothers Circus in Columbus, Ohio in 1862. After some initial success, the brothers upgraded their mode of transportation from wagon and cart to the much more efficient railroad. At the height of their popularity, the circus utilized 47 custom rail cars to transport their animals and equipment. At this time, the brothers’ enterprise was believed to include a 328-foot big top, six other large tents, 322 workers, 64 performers, 50 cages of wild animals, 13 elephants, and 7 camels.

The Sells Brothers Circus prospered for decades as they toured around the United States – predominately the Mid-Atlantic and further west. They eventually grew to be one of the largest circuses in the country, second only to P.T. Barnum’s Greatest Show on Earth. Unfortunately, in August of 1906 disaster struck. The company was traveling 100 miles southeast from Charleston, West Virginia to their next show stop in Ronceverte, West Virginia. After a stop in nearby Hinton, WV, the train entered Big Bend Tunnel, the same tunnel made famous by legendary John Henry, an African American folk hero said to have won a race against a steam-powered rock drilling machine there.

Whether it was a result of the size of circus cars modified to handle the circus elephants, or simply a mechanical problem, the train stalled in the middle of Big Bend Tunnel. As the train engineer worked frantically to get the locomotive moving once again, gas and smoke filled the 1.25 mile tunnel. Eventually another locomotive was dispatched from Hinton to aid the distressed train, but by then it was too late for the circus’ 300 monkeys. Extremely sensitive to the gas collecting in the tunnel, all of the monkeys perished.

It is thought that the dead monkeys were not discovered until the train arrived in Ronceverte and workers went to unload the animals. The remains were disposed of in a large trench, the location of which remains in dispute. Some believe the monkeys were buried beneath the site of the former Virginia Western Power Company, constructed after the burial in 1917. Others say that the monkeys were buried by the former Greenbrier Laundry. Regardless of the exact burial location, the story of the demise of these circus animals remained etched in the memories of both the workers and locals who witnessed it.

Despite the tragedy, the Sells Brothers Circus marched forward. Following the deaths of several of the Sells brothers and subsequent merges, the circus was ultimately absorbed by the Ringling Brothers/Barnum and Bailey’s Greatest Show on Earth. 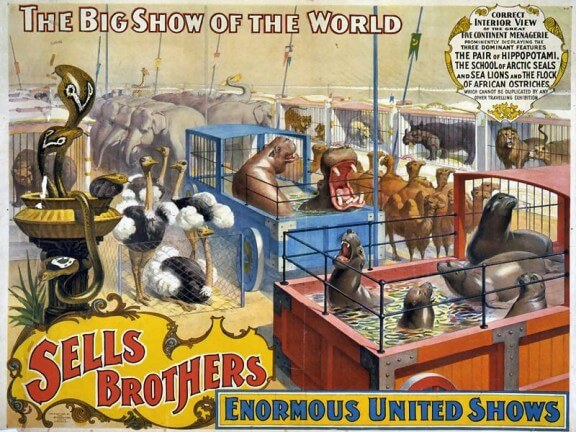