Local legend William Sidney “Sid” Hatfield was Police Chief of Matewan and one of the most popular figures of the West Virginia Mine Wars, a decades-long conflict between miners and coal operators. Hatfield was a leader for the miners during the Battle of Matewan, a shootout that followed a series of evictions carried out by detectives from the Baldwin-Felts Detective Agency.

He received his nickname, “Smilin’ Sid”, because of the gold caps on several of his upper teeth. He was a staunch supporter of the United Mine Workers of America and was instrumental in leading the mining community’s resistance to the Baldwin-Felts operatives.

The Battle of Matewan took place on May 19, 1920 between Baldwin-Felts Detective Agents against Hatfield and his deputies. After the battle, ten men lay dead on Mate Street: seven Baldwin-Felts Detective Agents, two union-armed miners, and Matewan’s very own Mayor Testerman. To miners, he was a legend and hero. The bullets from the shootout are still lodged in the building on Mate Street.

The battle had given Hatfield a degree of celebrity. He appeared in a short film, “Smilin’ Sid,” for the United Mine Workers (UMWA), and was photographed with other UMWA activists, including Mary Harris “Mother” Jones.

Several Baldwin-Felts men shot Hatfield on August 1, 1921 on the McDowell County Courthouse steps. None of the Baldwin-Felts detectives were ever convicted of Hatfield’s assassination. There was an outpouring of grief for the fallen local heroes at the funeral, which was attended by at least 3,000 people.

To this day, the bullet marks from the assassins are visible on the sandstone stairs of the courthouse. 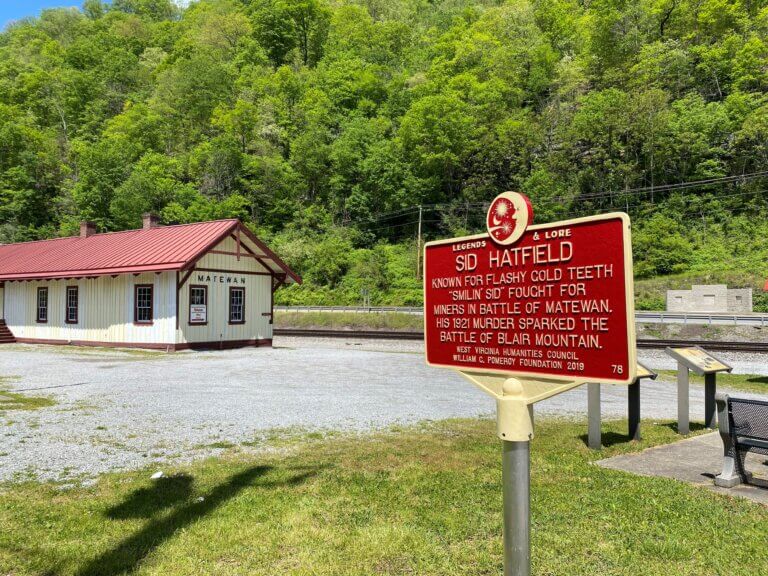