The Adsit Log Cabin is believed to be built by pioneer Samuel Adsit, a veteran of the Revolutionary War, circa 1794. It is reputed to be one of the oldest log cabins in the United States that still exists in its original location. The cabin was placed on the National Register of Historic Places in 1992.

Part of the Town of Willsboro, the peninsula jutting out into Lake Champlain known as Willsboro Point is stated by the Lake Champlain Region website as being around three miles long and about a mile across at its widest point. While most settlers first made their homes down along the Boquet River, Willsboro Point saw more growth after the Revolutionary War. Samuel Adsit and his wife, Phebe Perdy, were two such people who took advantage of the open land that would allow them to raise a family. The cabin they built served many of their children and grandchildren to come, and one of their great granddaughters, Mary Adsit Fowler, recalled in a Plattsburgh Daily Republican article from January 26, 1928 many of the stories that were passed down through the generations about living on the peninsula.

One notable story Fowler shared occurred during the War of 1812, when the Battle of Plattsburgh was raging on farther north on Lake Champlain. As the story goes, the family could hear “the boom and echoes of the cannons” from the battle, and when there were no longer any sounds of fighting, they determined that the conflict had ended. To find out for sure, one of the sons—said to have been just ten years old—was sent off by himself to Plattsburgh to learn about the outcome. Not only a familial legend, the story served to highlight the “old settlers” of the region and the “sturdy, patriotic stock” that they came from. The article notes that while their descendants may be “scattered all over the land,” they still carry “the living memory of the hardships and glorious deeds of their ancestors.” This sentiment was embodied by Fowler, who lived in the cabin for 40 years before moving across the lake to Burlington, Vermont, where it became her life’s “greatest pleasure” to look out over the lake towards the cabin “where the happy days were spent.”

The cabin was said to have been passed down through the family, but the Adventure Guide to the Champlain and Hudson River Valleys (2003) by Patricia and Robert Foulke states that after Fowler left in 1906 the cabin sat vacant. The property was later bought by Dr. Earl Van DerWerker with plans to turn it into a “summer camp,” but after a few of the buildings were torn down, the cabin was discovered. Still in relatively good condition considering its age, the cabin was said to still possess a lot of the original farming equipment and interior furnishings from the Adsit family. Dr. DerWerker made the decision to preserve the cabin and began the long restoration process.

As of 2019, the marker stands in front the log cabin, which has since been given over to the Town of Willsboro and is open to the public as an example of a traditional log cabin from the Adirondacks. 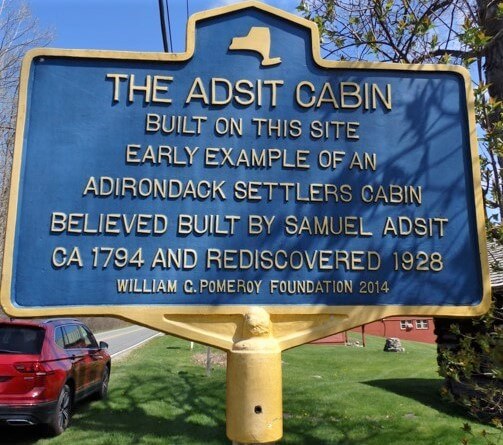 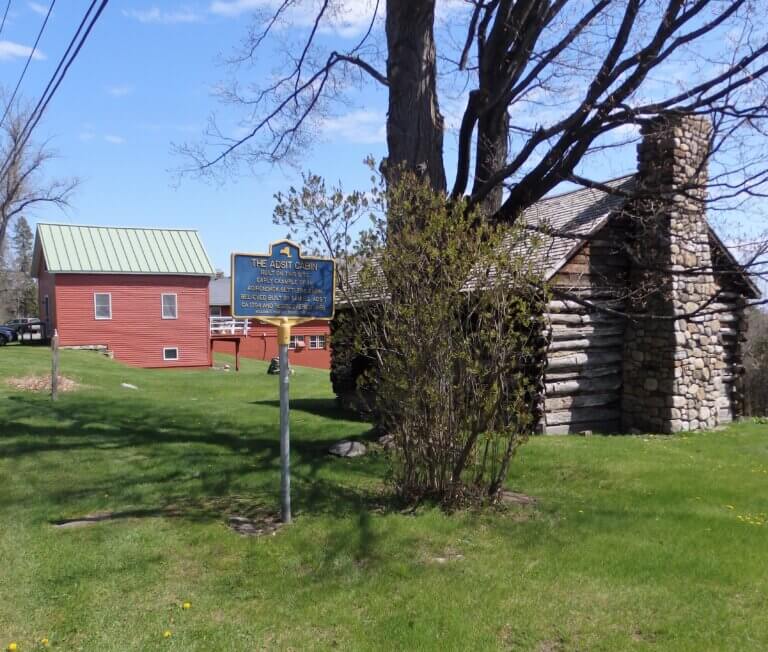