On September 6, 1814, a small American force stood between approximately 4,000 British troops and their destination, the village of Plattsburgh. Major John E. Wool of the 29th Infantry Regiment was sent by General Alexander Macomb with 250 regular troops to assist the militia at East Beekmantown. After an initial encounter, Wool conducted a steady fighting withdrawal. Making a stand at Halsey’s Corners, the Americans inflicted the largest number of casualties on British forces during the initial siege before the Battle of Plattsburgh.

The goal of the British, according to the Encyclopedia of the War of 1812 (1997), was to invade the United States for territorial gains. Their forces had just defeated Napoleon in Europe, so they were now able to focus their military strength on North America. This meant that the British had a larger number of troops at their disposal, and the United States was outnumbered. Forced to do what he could to slow the British army’s approach, General Alexander Macomb recounted in his letter to the Secretary of War on September 15, 1814 that he ordered Major John E. Wool to take 250 men and join the militia stationed on Beekmantown Road, with the goal of interfering with the British march towards Plattsburgh.

Major Wool tells of his own experience on Beekmantown Road in a letter he wrote May 10, 1860 to a man named Lossing, stating that he had been trying to convince General Macomb to allow him to take some men and attack the British camp. Wool wanted to leave on September 5 and “beat up [the British’s] quarters” while taking some prisoners “from whom the General might learn the state of [the British] forces.” His offer to attack was initially refused, and the letter stated that Macomb was worried that Wool could possibly be captured and men could be lost. Macomb eventually changed his mind and ordered Wool to take 250 men out on September 6 to try and hinder the British army’s advancement.

In a second letter written January 6, 1859 to Philip B. Roberts of Beekmantown, Wool reported that he left with his men around midnight and that he was supposed to be accompanied by Captain Leonard, who commanded the artillery and ultimately refused to join to the march. Wool met the British, commanded by Lieut. Colonel Wellington, about seven miles outside of Plattsburgh, where he “disputed every foot of ground.” When he had reached Culver Hill, Wool’s forces made a stand and forced the British to fall back for short time, noting that it was at this point Wellington and another British officer were killed. The British were able to rally, and the U.S. army was pushed back and forced to make another stand at Halsey’s Corner. Plattsburgh was then subsequently taken by the British, and they occupied parts of the town until the Battle of Plattsburgh on September 11, 1814.

Witness Nathaniel Chittenden Culver recalls the fighting that took place on September 6, 1814, when he was around the age of seven. His recollections were taken in 1887 and compiled in Beekmantown: A Landmark in a Passageway (1926), and in his retelling of events, Culver states that the house he lived in was situated on the west side of the road near the top of Culver Hill. At the time of the fighting, he was taking cover in the cellar of the house with his grandparents and uncle. Culver continued on to say that the fighting consisted of the men turning, firing, and then retreating before doing it all over again. There was damage done to the house, as Culver noted that “the balls went through and through” the walls of the building. In his retelling of events, Culver mentioned the death of Lieut. Colonel Wellington and the other British officer, noting that they were buried near the hill for a short time before being removed by the British years later.

As of 2019, the marker stands outside a monument to the battle that took place on Culver Hill. 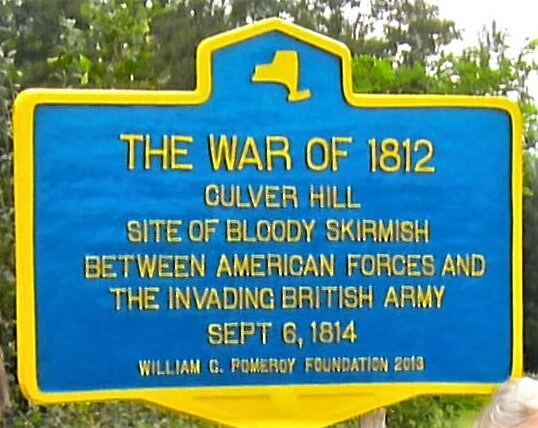